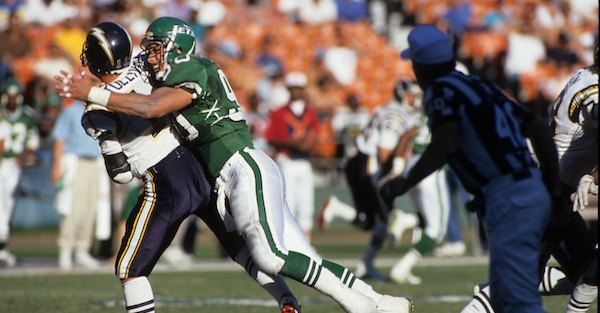 A man has been charged with manslaughter in the collision that killed former NFL players Dennis Byrd, per ESPN.

According to the report, charges were filed Wednesday against 18-year-old Zachary Reed, and an arrest warrant was issued.

Byrd, who had his career ended by a neck injury was killed in a two-vehicle crash in Oklahoma.

A 2000 Ford Explorer driven by Reed reportedly veered into oncoming traffic and collided head-on with Byrd’s 2004 Hummer V2, killing him on impact thanks to a variety of injuries, per Tulsa World. A 12-year-old in Byrd’s passenger seat was transported in critical condition, as was the then-17-year-old driver, via the report.

Byrd overcame a debilitating neck injury, in which he suffered partial paralysis after hitting a teammate in a 1992 game, shattering one of the vertebrae in his neck, per Fox Sports.

He defied doctor’s prognosis and was able to walk within months of the injury.

Former coach Pete Carroll shared the story of the collision to Newsday, and discussed the horrifying details:

“He didn’t even have the [neck] halo on yet, but we had to all tip him over so he wouldn’t choke on his own vomit,” Carroll said. “It was just horrible. Horrible. Just so catastrophic for a young man’s life.”

Carroll then said the team officials wanted to tell teammates Byrd would be a quadriplegic. 20 years after that hit, the Newsday piece noted Byrd was able to get around, though with some difficulty, on his own as he tended to a ranch with four kids and his wife.

Our thoughts go out to Byrd’s family and friends.