Our thoughts are with an NFL player, who played after suffering a tragic loss 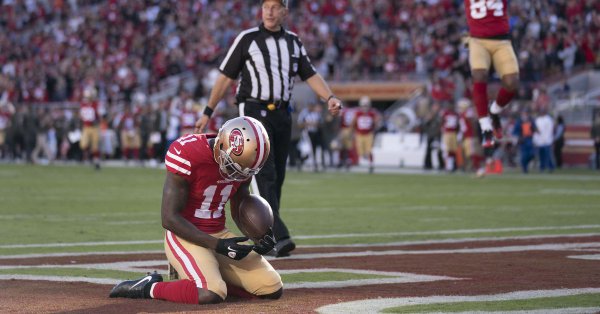 Marquise Goodwin, the wide receiver for the San Francisco 49ers, thought he had an amazing day ahead of him — he and his wife were expecting a child.

Instead, the day turned tragic.

Goodwin, on his Instragam account, posted a gut wrenching photo that announced his son had died at birth.

I just wanna thank those who?ve genuinely prayed for @morganakamomo & myself through out this pregnancy. Unfortunately we lost our baby boy due to some complications, and had to prematurely deliver him early this morning around 4am. Although we are hurt, I am grateful for the experience and grateful that God blessed me with a wife as courageous and resilient as Morgan. The pain (physically, mentally, & emotionally) that she has endured is unbelievable. Please Pray for the Goodwin family.

Then , Goodwin went out and played that day against the New York Giants. On this play, he hauled in an 83-yard touchdown from and quarterback C.J. Beathard in the first quarter. As he approached the end zone, he pointed to the sky and when he cross the line, collapsed to his knees.

Marquise Goodwin was emotional after this TD. After the game He revealed that he lost his son this morning to a premature birth. Prayers out to Goodwin and his familypic.twitter.com/R0Y9VgEvpJ