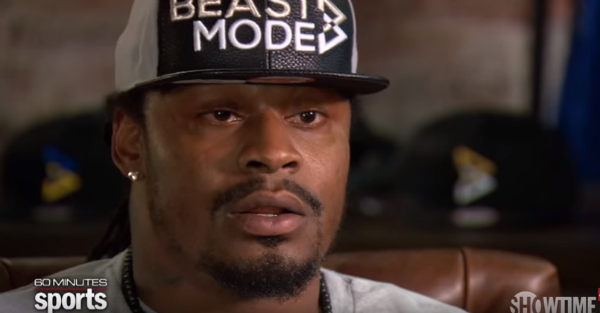 It truly is a mystery, and it’s certainly entertaining.

Now with the Oakland Raiders, Lynch was recently asked to speak about “the elephant in the room,” which meant he was asked to talk about his national anthem protest.

His answer was pure beast mode:

“I think the elephant just left the room because a little mouse ran in here,” Lynch responded. “Didn’t they say elephants are scared of mouses or something?”

Another reporter brought up the fact that a lot of Raiders fans will be wearing Lynch’s jersey this weekend during Oakland’s preseason game. Lynch was asked whether he thought it mattered if those fans sat down or stood during the National Anthem, to which Lynch responded by breaking down a play. Kind of.

“So when we run 74, or something like that, where I gotta scan and read on both sides, you know, that’d be pretty difficult. But you know, for the most part, I’m a veteran, so I can make it work,”

As GQ pointed out, Lynch gave reporters a master class in the “stick to sports” routine. That continued when asked to speak about head coach Jack Del Rio’s thoughts on his protest. The question centered around Del Rio giving players space to be themselves.

“Yeah, because on Doctor-24, you know, it’s a designed way that you supposed to run it, but I have all freedom to go any which way that I choose to run it, so, I would say yeah.”

Lynch is a master troll and this is yet another example of that. It’s perhaps not as good as some of his previous press conferences, but he somehow took a hot button topic and turned it into something completely different.

He spoke about elephants, mice, and football.