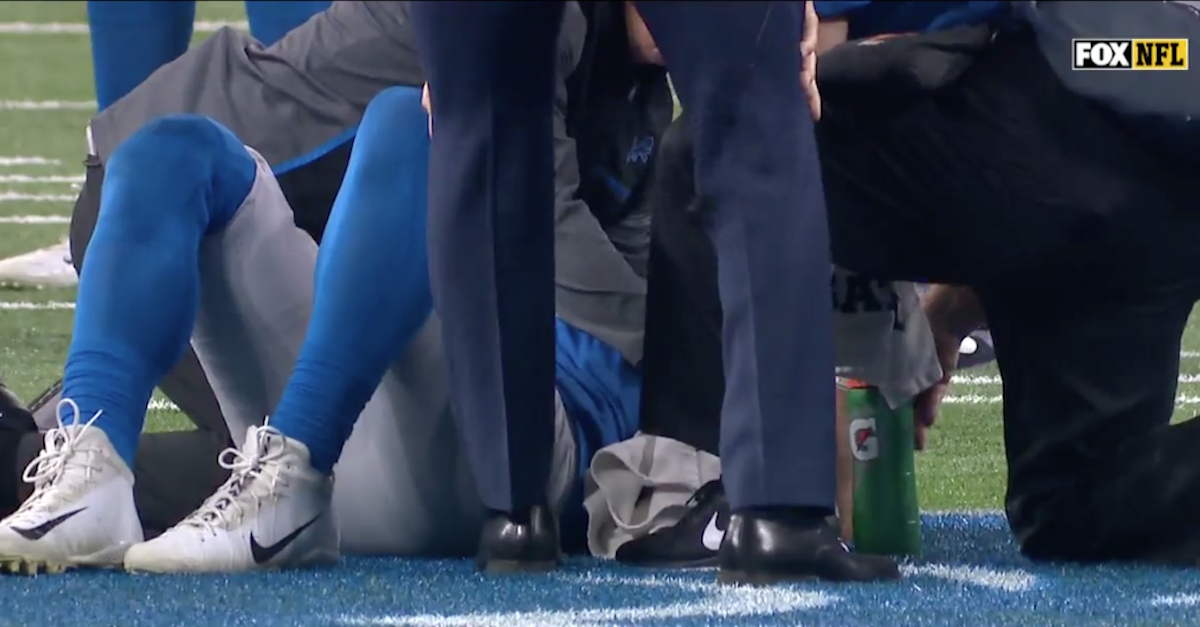 Matthew Stafford is one of the toughest players in the NFL today, and it’s easy to see why.

During Thursday’s game against the Minnesota Vikings, the Detroit Lions quarterback was rolled up on from behind and after a long stay on the ground, he limped off the field.

He walked around on the sideline and according to the FOX sideline reporter, trainers didn’t even look at his knee, but re-taped his ankle. Stafford would return to the field on the Lions’ next possession.

Stafford became the highest-paid player in NFL history earlier in the offseason.

Stafford is much-maligned in some circles and a lot of the criticism he receives is based on a lack of team success. But, the Lions clearly love Stafford, as ESPN?s Michael Rothstein noted in his talk with  Lions president Rod Wood, who said Detroit would do ?whatever it takes? to keep Stafford long-term.

?I?m comfortable in getting a deal done with him, and we?ll see where that ends up. It?s going to be whatever it takes, I think, to make it happen from both sides, and whether he becomes the highest-paid or not, it?ll be a short-lived designation because, as (general manager) Bob (Quinn) said, and I think it?s true, if you?re in the top whatever of quarterbacks, when your time comes up, your time comes up and then somebody else?s time comes up, and they become the highest-(paid player).?

Wood?s notion that the next top-tier quarterback to hit free agency will almost always cross the threshold is an accurate one.

Still, the 29-year-old Stafford, entering the final year of his contract, threw for 4,327 yards and 24 touchdowns against 10 interceptions last season. He?s also a Pro Bowl player (2013) who has thrown for more than 30,000 yards in his career, and owns the NFL record for most passing yards in his first 100 games. He?s also the Lions? all-time leader in every major passing category for the Lions, and he doesn?t even turn 30 until next February.