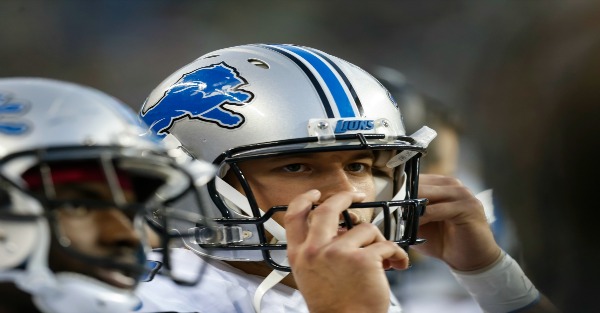 SEATTLE, WA - October 5: Quarterback Matthew Stafford #9 of the Detroit Lions straps up his helmet on the sidelines during a football game against the Seattle Seahawks at CenturyLink Field on October 5, 2015 in Seattle, Washington. The Seahawks won the game 13-10. (Photo by Stephen Brashear/Getty Images) *** Local Caption *** Matthew Stafford

The Detroit Lions lost to the Seattle Seahawks on Monday due partly to a horrible call by the refs in the fourth quarter. The ball was batted out of the end zone by Seahawks linebacker K.J. Wright after receiver Calvin Johnson fumbled on the half-yard line. It is clear that Detroit should have gotten the ball back on the 1-yard-line for a chance at victory.

Now, the Lions are at 0-4, including an embarrassing loss to the Vikings.

There was plenty of drama following the game Monday, including some from Lion?s quarterback Matthew Stafford?s wife, Kelly, who posted a conversation between her and her husband on Instagram regarding the referees from the game.

Kelly Stafford is back at it pic.twitter.com/zmT3UZ6lWF

This isn’t the first time Mrs. Stafford has aired her frustrations on social media. She also called out a perceived lack of loyalty from Detroit fans on Twitter during a game back in December of 2013.

Maybe Detroit can finally land it’s first win of the season against the Cardinals on Sunday. Then again, maybe not.