Mel Kiper says neither Leonard Fournette, Dalvin Cook is the most talented back in the NFL Draft 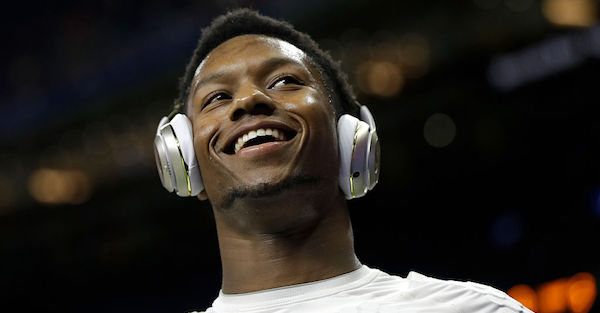 There has been plenty of debate among scouts and analysts about who the top running back is in the upcoming draft. Leonard Fournette, Dalvin Cook and Christian McCaffrey are at the top of most lists, but ESPN’s Mel Kiper Jr. had a surprise choice for whom he believes is the most talented back in this class.

Related: NFL.com’s mock draft has the supposed No. 2 running back taking a hard fall in the draft

“On talent, and on ability, the kid averaged over 6 yards a carry in 9 games this year, he averaged almost 15 yards a catch, he had a 97-yard kickoff return against Ohio State, he’s 228 pounds and he ran 4.43 He was a top kid coming out of high school, so he’s an elite–like [Leonard] Fournette– to me he’s a better back than Fournette, on talent,” Kiper said.

Kiper did go on to say that Mixon’s history off-the-field might keep him from being drafted in the first round, but he said he didn’t think Mixon would last past the second round. Mixon was caught on video punching a woman in the face following an incident outside of a cafe.

ESPN has Mixon as the No. 70 overall player for this draft and the No. 5 running back.

Kiper mentioned Oakland and Green Bay as potential landing spots for Mixon in the late first round, and both teams are in need of a running back. Mixon is rising up draft boards, and it seems as if he will be drafted either late in the first round or sometime during the second day despite his trouble outside of football.