Three Dolphins players kneel in London for the national anthem 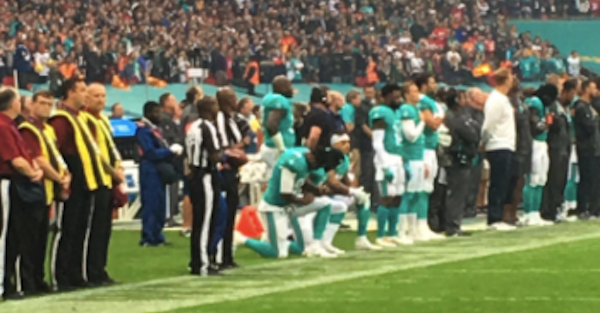 Many players across the NFL chose to kneel for the national anthem a week ago and the trend does not appear to be going away. In fact, Sunday morning’s game between the New Orleans Saints and Miami Dolphins, taking place in London, featured three players from the Dolphins taking a knee prior to the start of the contest.

However, this was a bit different in that Miami’s Julius Thomas, Kenny Stills and Michael Thomas chose to stand for “God Save The Queen” after kneeling for “The Star-Spangled Banner.”

Armando Salguero of the Miami Herald caught up with Julius Thomas in advance of the game on Friday and Thomas gave this reasoning for his personal choice to kneel.

?I think anything you do, anytime you try to make a statement, you have to do it with the full understanding of what statement you?re making. When I took the stance and stepped a little outside of myself and thought about others, I did it with the understanding this is something I was committing to. So I?ll continue to commit to seeking equality for all people.?

Beyond that, Thomas asked if he thought it would be perceived as a “betrayal” to kneel for the American anthem while standing for another and he said, “I didn?t think about that but I have no problem standing for the British anthem.”

The reactions are already coming fast and furious and they certainly won’t be stopping.