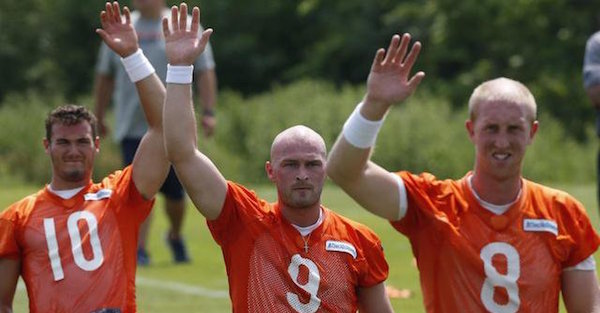 The Mike Glennon experiment is over in Chicago.

The Bears have announced they will cut Glennon just one year after signing him to a three-year, $45 million contract.

Mike Glennon will be released at the start of the new league year.

The deal was expected to make the veteran Chicago’s franchise quarterback, however, plans changed after the team selected Mitchell Trubisky with the second overall pick in the 2017 NFL draft. Glennon started in the Bears’ first four games before Trubisky took over as the team’s full-time starter in October.

“The veteran quarterback lost his starting job to rookie Mitchell Trubisky in Week 5 after turning the ball over eight times in four games. Glennon, who signed a contract last offseason that included $18.5 million in guarantees, now seems out of place in new coach Matt Nagy’s offense, which is expected to rely heavily on run-pass options for Trubisky. Plus, Glennon’s base salary for 2018 is $12.5 million. That’s way too much money for a backup quarterback. The writing is clearly on the wall that Glennon will not be playing in Chicago next season.”

Glennon led the Bears to a 1-3 record as the team’s starter and threw for four touchdowns and five interceptions, while also losing three fumbles.

While it would be smart to keep a veteran presence around as an insurance policy for Trubisky, who enters his second season, perhaps Chicago can find a suitable replacement for a much cheaper price tag.