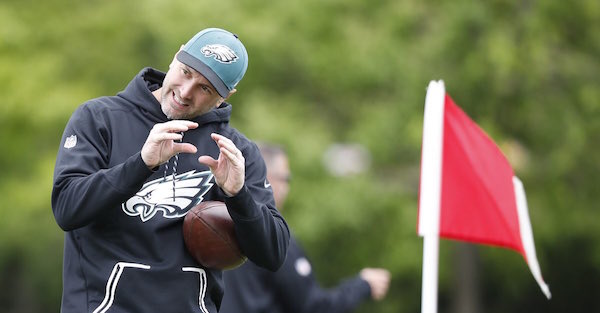 According to 247Sports, Groh was selected over running backs coach Duce Staley, who also applied for the position on Monday, to replace former OC Frank Reich.

Last week, NFL Network?s Ian Rapoport reported that Philadelphia planned to promote Groh and Staley to bigger positions, with both being considered for the offensive coordinator position.

With the #Eagles having no immediate plans to hire an offensive coordinator to take Frank Reich's job (potentially elevating both Duce Staley and Mike Groh to bigger jobs), all the OC and DC jobs seem to be filled (pending more craziness).

Groh, the son of former New York Jets and Virginia head coach Al Groh, has worked as an offensive assistant for several college and NFL teams including Alabama (2011-12), the Chicago Bears (2013-15) and the Los Angeles Rams (2016) before joining Philadelphia last offseason.

Reich, who spent the past two seasons as the Eagles? offensive coordinator, accepted the Indianapolis Colts? head coaching position earlier this month.