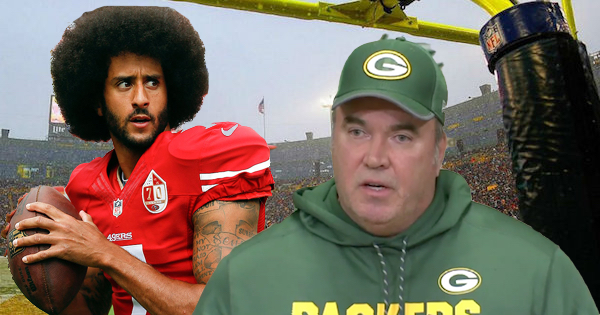 Aaron Rodgers is likely done for the year, quarterback Brett Hundley hasn’t been impressive in his limited action and rumors emerged that the Green Bay Packers were interested in bringing in Brian Hoyer, who was released by the San Francisco 49ers.

The #Packers tried to steal him, but Brian Hoyer ends up back in New England where he wanted to be. https://t.co/mgeA8mgftO

Head coach Mike McCarthy shed the blame on Thursday, noting it was player personnel who were doing their jobs:

But McCarthy says he's not naive, the personnel department could have had conversations leading up to deadline. McCarthy wasn't involved.

McCarthy: "I think the sample size on Brett Hundley is way too small to make conclusions" about whether he can play in this league. #Packers

It’s hard to believe McCarthy wasn’t involved in bringing in another quarterback, but it’s possible that didn’t get down the line far enough for the head coach to consider.

Or he’s just covering himself for prior comments.

After the team lost Rodgers to a broken collarbone, McCarthy discussed the likelihood, or lack thereof, of bringing in free agent lightning rod Colin Kaepernick:

That resulted in this situation:

McCarthy specifically noted the investment he put into his backup quarterbacks, how the quarterback room was where they wanted it and how the they’d continue on the path they were on.

So what’s the difference between Hoyer and Kaepernick?

One stands for the national anthem, has been a career journeyman and is 16-21 over his career.

The other kneels for the national anthem, led the 49ers to a Super Bowl berth, torched the Packers in the playoffs and is 28-30 for his career.

In two losses, Hundley has thrown for 244 yards, one touchdown and four interceptions.