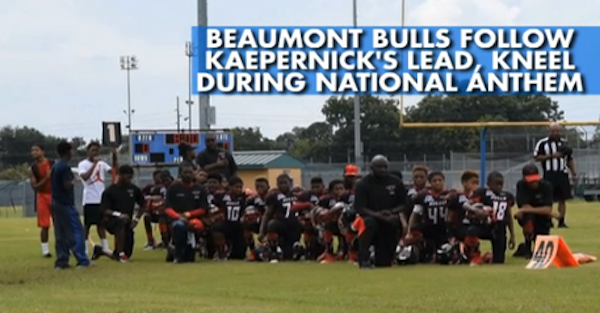 While Colin Kaepernick’s national anthem protests in the NFL continue, we’ve seen the movement spread to collegiate and youth sports in recent months.

For one school in Beaumont, Texas, the protests actually caused the 11- and 12-year-old boys football team to have their season cancelled, according to the New York Daily News.

The team evidently got permission from league officials before taking a knee and did so ahead of a 27-0 win. After the team reportedly received death threats and racist taunts, the executive board reportedly backed the team before changing direction and telling them not to take a knee ahead of the next game.

The team did so anyway, winning yet again before a bye week.

That would be the team’s last game, after the league reportedly suspended the head coach and banned parents from attending games, practices or events with a threat of being arrested if they showed up. The coach resigned, according to the report, and the team opted not to practice until their coach was brought back by the board.

The board then chose to simply cancel the rest of the team’s season.

It’s just the latest backlash against the national anthem protests that have spread across the country.

There has been plenty of controversy surrounding the national anthem protests, started by Kaepernick to take a stand against the oppression of ?black people and people of color.?

The movement has shifted throughout the sports world, with some high school athletes laying on their backs with hands up and college athletes receiving alleged death threats. The latest lashing out against people protesting the national anthem ended up with fans booing the home team ECU band and shirts being made to protest Kaepernick.

Shirts with a rifle scope trained on Colin Kaepernick selling for $10 outside of Ralph Wilson stadium. pic.twitter.com/bSuxF3G5qq