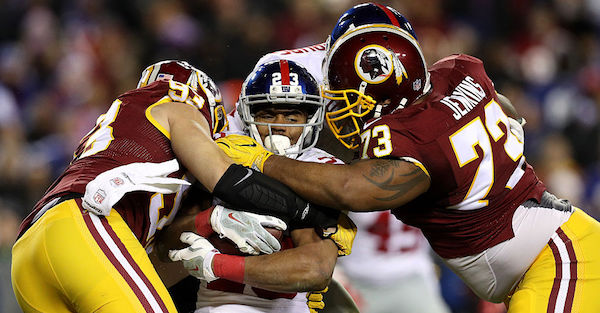 The New York Giants made the playoffs last season, but they haven’t won a playoff game since their Super Bowl run in 2011.

NFL analyst and scout Bucky Brooks thinks that trend will change in 2017 thanks largely in part to the addition of first-round pick Evan Engram.

The Giants already have star receiver Odell Beckham Jr., and they added veteran possession receiver Brandon Marshall in the offseason.

The Giants haven’t had much production at tight end over the last few years, but Brooks said Engram’s ability to make plays over the middle of the field will provide Eli Manning with exactly what he needs for the offense to succeed.

“That’s why I believe Engram is the missing piece to the Giants’ offensive puzzle,” Brooks wrote. “The 6-foot-3, 234-pound tight end is an athletic freak with 4.42 speed and a 36-inch vertical jump. He enters the NFL after putting the finishing touches on an impressive résumé at Ole Miss as the Rebels’ all-time leader in receptions (162), receiving yards (2,320) and TD catches (15) by a tight end.

“The two-time team captain, who finished with 42 career starts, is a polished tight end with all of the tools to be an impact player in his first season.”

Brooks called Engram the “most polished route runner of the 2017 tight end class,” and he predicts the Giants will use him in multiple ways in the passing game.

He also said if Engram becomes an explosive playmaker down the middle of the field, defenses will find it more difficult to double team Beckham or Marshall.

With those three weapons in the passing game, the Giants could become a legitimate contender in the NFC East and the NFC. The rest will depend on whether a 36-year-old Eli Manning can still consistently play like a Super Bowl-caliber quarterback.