This rookie is drawing comparisons to Calvin Johnson as Megatron 2.0 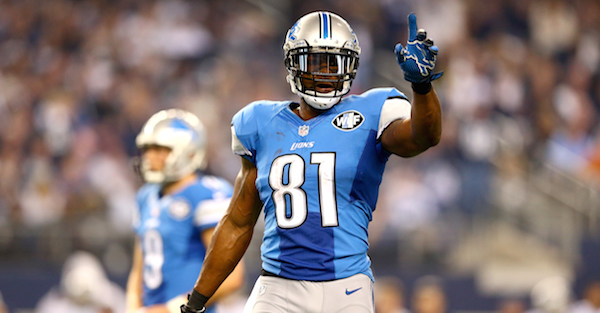 ARLINGTON, TX - JANUARY 04: Wide receiver Calvin Johnson #81 of the Detroit Lions holds up one finger in the second half while taking on the Dallas Cowboys during the NFC Wildcard Playoff Game at AT&T Stadium on January 4, 2015 in Arlington, Texas. (Photo by Ronald Martinez/Getty Images)

“DGB’s size is nearly identical to that of Calvin Johnson. The athletically gifted rookie will be a matchup nightmare for defenses if he can master the route running, something he’s struggled with thus far. If he can stay on the field, he should be a large part of the Titans’ red zone attack this season.”

If Green-Beckham can develop into anything near Johnson, he and Mariota could have a chance to form one of the next great duos.