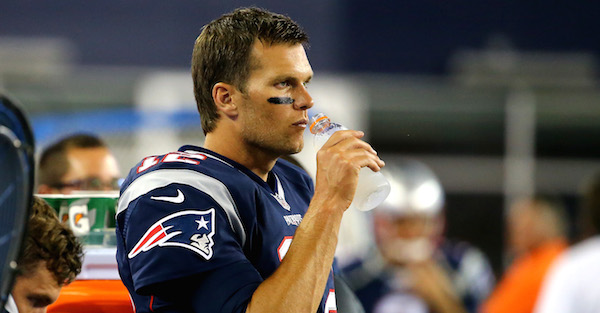 This is the equivalent of, politely, calling B.S.

The NFL refuted Gisele Bundchen’s claim that her husband, Tom Brady, had a concussion last season.

From @NFL, which reviewed all Tom Brady reports: “There are no records that indicate that Mr. Brady suffered a head injury or concussion…”

That was part of a longer statement that said:

The full statement from @NFL on Tom Brady's concussion-related questions (including working with @NFLPA on it): pic.twitter.com/Piek9sR80E

Gisele Bundchen’s claim set off a frenzy, with TMZ.com reporting that  the NFLPA was looking into the claim.  The NFLA also put out its own statement:

Happened to have lunch with @DeSmithNFLPA today and brought up the Tom Brady situation, this is what he had to say #NFLPA : pic.twitter.com/SLKqe0az8U

It all started when Gisele Bundchen made the statement on CBS this morning:

She said her husband suffered a concussion last season and “He does have concussions.”

That’s an explosive statement on several fronts. First, on injury reports over the last four years, Brady has never had a concussion listed.

Second, the NFL has been under fire for its handling of concussions, and to its credit, has taken steps to make sure players that exhibit any signs are treated immediately and aggressively. There would be a ton of questions if the league’s most viable player was someone able to skirt those requirements.

Patriots have no immediate comment on Gisele Bundchen's concussion-related comments on CBS about her husband Tom Brady.

to be fair in this brady thing: just because gisele says it was a "concussion" doesn't mean it was one. ppl can use the term loosely.

Brady, the five-time winning Super Bowl quarterback, hadn’t missed a game since 2008, when he went down with a knee injury in the opening contest of the season and missed 15 games.