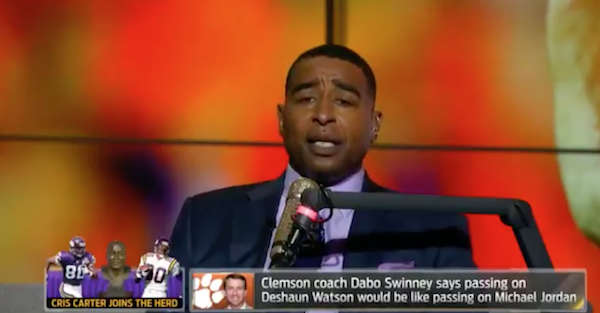 Jared Goff and Carson Wentz went No. 1 and 2, respectively in last year’s NFL Draft, but FS1 analyst and Hall of Famer Cris Carter said Deshaun Watson will be better than both of them.

Related: Deshaun Watson does exactly the opposite one top-picking NFL team wanted him to do

On an appearance on Colin Cowherd’s show, Carter cited Watson’s performances against Florida State and Alabama as proof that Watson can be a star in the NFL.

Watson’s draft grades have been all over the place, and there’s no telling where he’ll fall in the draft at this point. He could go top 10, or he could potentially slide to day two of the draft.

North Carolina’s Mitch Trubisky and Notre Dame’s DeShone Kizer have also been mentioned as potential first rounders, and several teams are in need of quarterbacks. The Cleveland Browns have the first pick in the draft.