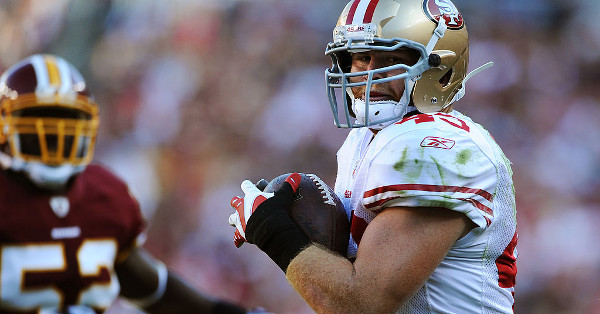 RELATED: NFL Hall of Famer arrested on suspicion of DUI

The 29-year-old fullback allegedly tried to check into a room at Fisherman’s Wharf Marriott Hotel on Sunday night, but was told there were no vacancies.

He returned Monday morning, knocked on the door of one of the rooms, was told he had the wrong room by one of the occupants and then started attacking the guests.

One of the guests was a 70-year-old man, the father of the man who opened the door. He was punched in the face and suffered broken bones, as both men were sent to the hospital for their injuries.

The 49ers have released Miller:

Last year, Miller was arrested for spousal battery and plead no contest to a misdemeanor charge of disturbing the peace, after the woman said there was no physical contact.