OC to 3-time Pro Bowler: “You came here because of money” 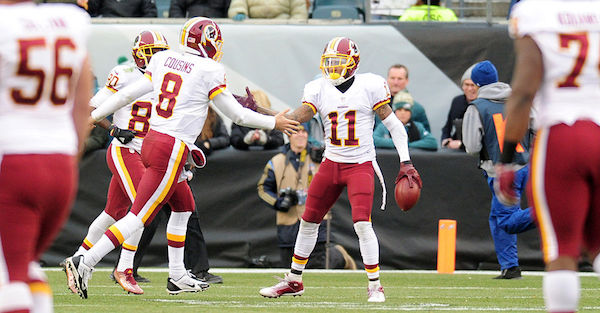 Evan Habeeb/Getty Images
PHILADELPHIA, PA - DECEMBER 11: DeSean Jackson #11 of the Washington Redskins slaps hands with Kirk Cousins #8 of the Washington Redskins after Jackson scored a touchdown in the third quarter against the Philadelphia Eagles at Lincoln Financial Field on December 11, 2016 in Philadelphia, Pennsylvania. (Photo by Evan Habeeb/Getty Images)

The Tampa Bay Buccaneers’ two biggest offseason additions were aimed to help quarterback Jameis Winston in the passing game. The Bucs drafted tight end O.J. Howard in the first round of the NFL Draft, and they signed receiver DeSean Jackson to a three-year, $33.5 million deal with $20 million guaranteed.

The Bucs offered the 30-year-old Jackson more money than any other franchise, and offensive coordinator Todd Monken said Jackson needs to earn that money on the field.

Monken also said the Bucs aren’t paying Jackson based on what he’s already done on the field. Rather, they are paying him for what the team needs him to do on the field over the next three years.

Jackson and fellow Bucs receiver Mike Evans should give Winston one of the best receiving corps in the NFL. Evans is more of a physical possession receiver, while Jackson has been known for his ability as a deep threat in the passing game. Once they add Howard’s ability to work the seams, the Bucs’ passing game should be difficult to defend.

His touchdown production has slipped over the last few years, but he has still averaged over 17 yards per reception during the last three seasons.