Odell Beckham Jr. will have no trouble finding work if he ever stops being great at catching footballs. Everyone from Netflix to ESPN to local comedy shows should be lining up for his comedic services because OBJ knows how to make his fans laugh.

Aside from doing amazing things during his high school football career, college football career at LSU and for the New York Giants and Cleveland Browns, the 29-year-old superstar and newest Los Angeles Ram has beat up and proposed to a kicking net, handed out cash to LSU players and even smacked a police officers butt in New Orleans.

It seems like when he's not scoring touchdowns, he's just trying to have a good time. Colin Cowherd has even called him the NBA player of the NFL. Unfortunately, like many a-NBA player, OBJ tore his ACL against the Cincinnati Bengals in 2020 and struggled getting back to full strength. He helped the Rams offense win Super Bowl LVI over the Cincinnati Bengals but unfortunately tore his ACL again.

Still, OBJ and his funky hairstyles may be one of the most recognizable characters on the gridiron these days. His mother, a former LSU track star who may be even faster than her son, is always in the stands supporting her baller son.

Right next to her is the woman that he calls his girlfriend. They recently expanded to a family of three. 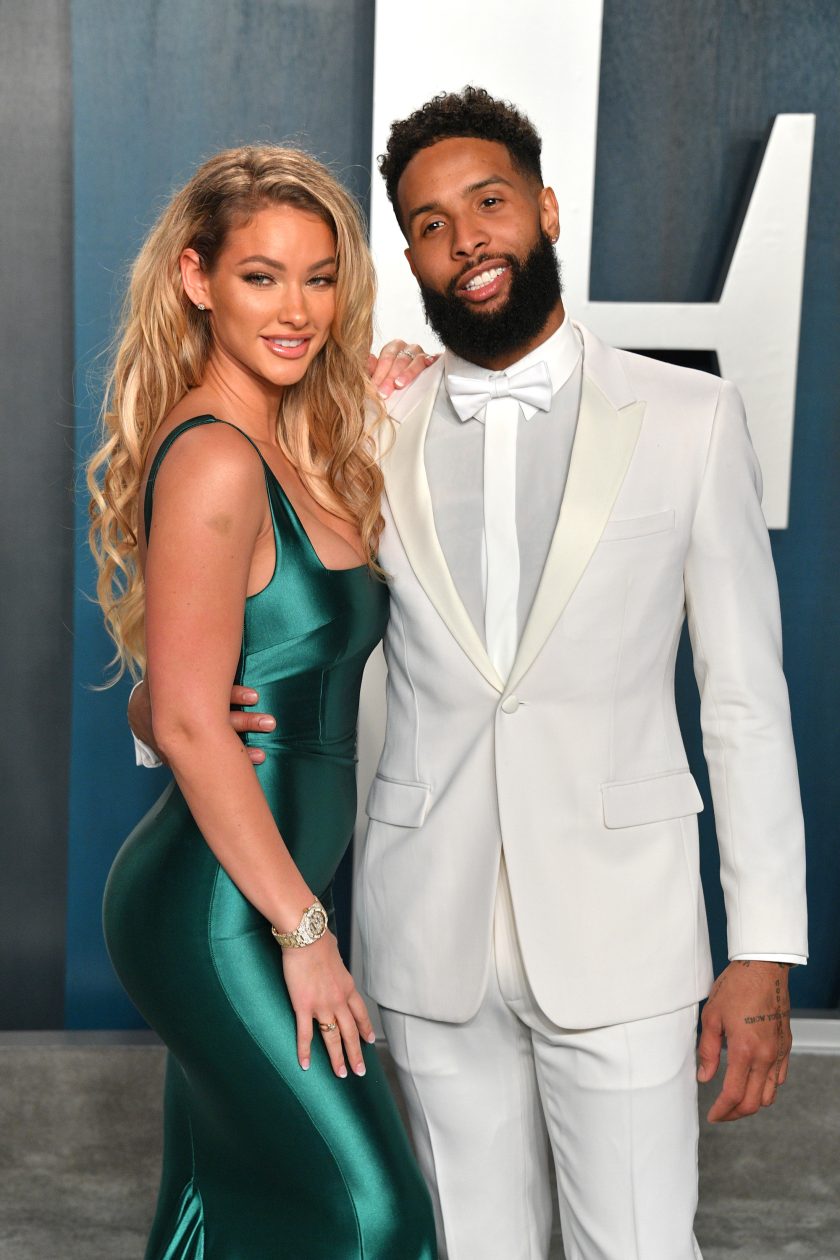 Odell Beckham Jr. appears to be dating a woman named Lauren Wood. Wood is an Instagram model and influencer who loves to show off workout videos, Fashion Nova bikini pictures and her NFL star boyfriend. She has a whopping 1.8 million followers.

They didn't go public with their relationship until November 2019, when Wood posted photos of them for his 27th birthday.

"Happy birthday @obj ! Your soul is pure gold . U know I can write lot about you, but I rather keep passing these love letters ? Ceasar home ?? PS this blurry will always be my fave pic of us bc wtf is going on lol yumiii af," she wrote in an Instagram post.

In March 2020, Beckham Jr. posted about LoLo Wood to wish her a happy "born day."

"It's all about the person u can be ya self wit, I find that this world takes itself a little to serious. Life is full or moments, happy or sad but...what u choose to fill them wit... is on u, I thank u for bein u...YUMI...happy born day," he wrote.

According to Cleveland.com, the pair was quarantining together during the coronavirus pandemic and offseason in Los Angeles. Among the ways they kept their mind off COVID-19 and kept busy during lockdown last year were relaxing by the pool, working out a home gym and throwing footballs into basketball hoops.

Wood first gained notoriety for working on the MTV show "Wild N' Out" produced by Nick Cannon. She also has reportedly had endorsements from Hot Miami Styles, Fashion Nova and Pretty Little Things. How they met remains a mystery, but I'm sure it was love at first sight. Clearly she was a great selection.

OBJ's girlfriend Lauren Wood attended plenty of OBJ's games when he was catching passes from Baker Mayfield on the Browns.

In 2019, OBJ's mother Heather Van Norman posted a photo to her Instagram account for the first time of them two on field prior to a Browns football game. Neither of them had posted about each other yet, but it looked like they were pretty serious by then.

If anything, it seems like his mom likes his new girlfriend.

The two were in the stands in Los Angeles watching their favorite guy take on the Cincinnati Bengals in Super Bowl LVI. 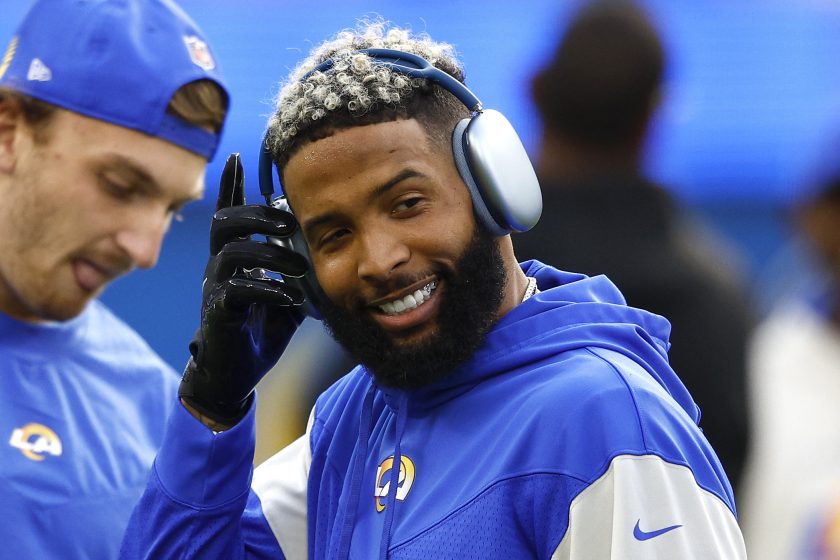 Beckham Jr. has done and said a ton of crazy things. In 2017, he was busted on gun and drug charges in Texas. But an allegation that took social media by storm the day after Labor Day 2020 has to be the craziest.

A woman by the name of Slim Danger, who is reportedly the mother of rapper Chief Keef's baby and an adult film star, went on the 'No Jumper Podcast" hosted by Aliza and Celina Powell. She revealed a very interesting tidbit about her alleged time with Odell Beckham Jr., whenever that was.

Please, look that up on Google BUT NOT ON YOUR WORK PHONE.

"He loves to be sh***ed on," Danger told the No Jumper Podcast.

Well then. Of course, this story blew up and was immediately trending everywhere.

Take this allegation with the biggest grain of salt ever. No one has any idea if it's true, but it would be something to make up this story completely out of thin air. Plus, no one should be shamed for their bedroom preferences, am I right? Right? Bueller?

Anyway, that probably isn't the craziest fetish story regarding a standout professional athlete. OBJ should probably ignore all of this and focus on catching passes from Matthew Stafford.

Odell and Lauren welcomed their first child, a baby named Zydn, in February 2022. Zydn was born less than two weeks after Beckham won his first Super Bowl at SoFi Stadium, during which he suffered a torn ACL and subsequently underwent successful surgery.

It's been an emotional month, but the wideout has been entirely thankful for his family.

"THE biggest blessing I've ever had in my life arrived here on earth! The words, I can't even put together for the overwhelming emotions that ran thru me ... a moment I will never forget and cherish forever. Zydn was born n at that moment I knew my life changed for the better. Lauren Wood, u changed my life forever and delivered the most beautiful gift of all... EFFORTLESSLY! Ur strength throughout this gives me the courage to keep goin because i now kno with u by my side and holding it down for me, I can get thru anything. I love u so much," he wrote in an Instagram post.

As for the name Zydn, it's said to be a variation of "Zayden" but without the vowels.

Odell Beckham Jr. has a long recovery road ahead of him, but he'll have his hands full as a new father. And you can bet you'll see him on the gridiron again.

"U better believe imma be back , and imma be back better than ever before," he wrote on Instagram. 'I mean that Shxt from the bottom of my heart. Filled wit LOVE and gratitude. I wanna thank u all for the love and support, this is not the end; but only the beginning to everything I've ever dreamed of. LUV."

This post was originally published on September 8, 2020. It was updated after the couple's baby announcement.

MORE: Odell Beckham Jr.'s Net Worth: How "OBJ" Built a Fortune Off the Field