Odell Beckham Jr. gets awful injury diagnosis after he was carted off the field 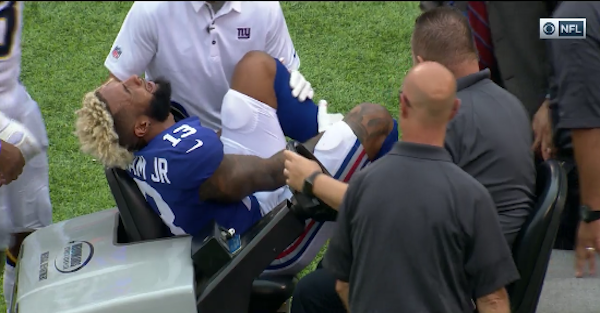 New York Giants receiver Odell Beckham Jr. was carted off the field after suffering an injury during the fourth quarter of Sunday’s game against the Los Angeles Chargers and did not return. According to the Giants, he fractured his ankle:

Odell Beckham is headed for surgery, per source. He injured his leg in the fourth quarter.

Reports are all over the place on Odell Beckham. Teams says report he's heading to surgery is not true.

Beckham appeared to be grabbing his left ankle as team officials examined him on the field before placing him on the cart with just over three minutes remaining.

Beckham has been playing through a previous ankle injury all season, which forced him to miss the Giants’ season opener against the Dallas Cowboys.

Both players were also unable to return after their respective injuries.