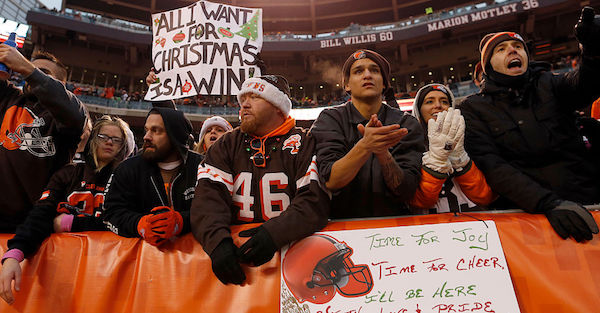 The Cleveland Browns’ biggest issue in the past has been production from the quarterback position. The Browns haven’t had stability at quarterback in years, and for them to become a playoff team again, they will need to find a reliable QB to lead them in the difficult AFC North.

The Browns brought in Brock Osweiler in an offseason trade, and they drafted former Notre Dame QB DeShone Kizer in the second round of the 2017 draft. Those two will battle with Cody Kessler?who started eight games for the Browns last season?for the starting QB job for next season.

According to Cleveland.com’s Mary Kay Cabot, Kizer has a good chance to start for the Browns next season. Cabot was asked about the QB battle in a recent Q & A, and here’s what she offered on the quarterbacks.

“In rookie minicamp and the first week of organized team activities, Kizer demonstrated superior physical skills to the other quarterbacks in regards to arm strength and mobility,” Cabot wrote. “If he can combine that with a grasp of the offense and an ability to read defenses, he’ll be right in the mix for a chance to start on opening day. It will largely depend on if the Browns want to take their time with him, or throw him into the fire.”

Cabot also said Kizer is “very smart,” and she expects him to start either to begin the year or early in the season.

Cabot said one reason the Browns could start a veteran QB earlier in the season is because the Browns play all three division rivals within the first four weeks of the season.

But the Browns will need to determine if Kizer can be the quarterback of the future relatively soon in case they need to draft another QB next year. So it might make sense for Hue Jackson to start Kizer in the Browns’ Week 5 matchup against the New York Jets unless Osweiler or Kessler has the team in good shape for the first few weeks.