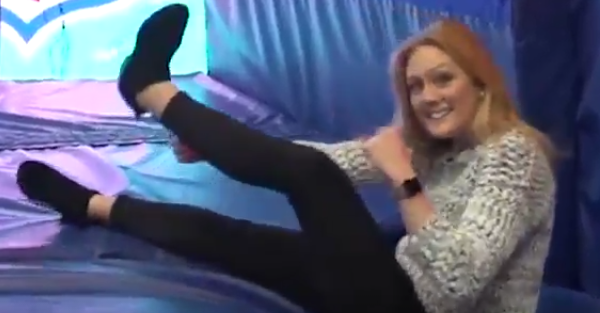 This is something you don?t see every day.

A reporter for the Detroit Lions? website, Tori Petry, ran the 40 at the combine in   heels in a blistering 5.98 seconds.

If you don?t think that?s fast, try running the 40 in heels.

Check out https://t.co/2dJ93l0ptc for coverage of the #NFLCombine from Indianapolis. pic.twitter.com/2qewVS7ioe

Here?s some perspective. Her time ? again, in heels ? would have nearly beaten nine NFL hopefuls and was faster than that of Houston Cougars offensive lineman Isiah Thompson, who clocked in at 6.06 seconds in 2011. And, she thinks she could have done better.

True story 😏💁🏼 I should have put my head down for the start. That would've shaved at least another tenth off, right? Haha https://t.co/Msae5ULbJN

And, she beat Rich Eisen, who runs the 40 in a suit every year for a great cause — he raises money for St. Jude’s Children’s Research Hospital. He did a 6.02 this year (and who cares what his time is; it’s the cause that counts).