One of Terrelle Pryor’s former teammates shows him no love, rips him as “arrogant” and worse 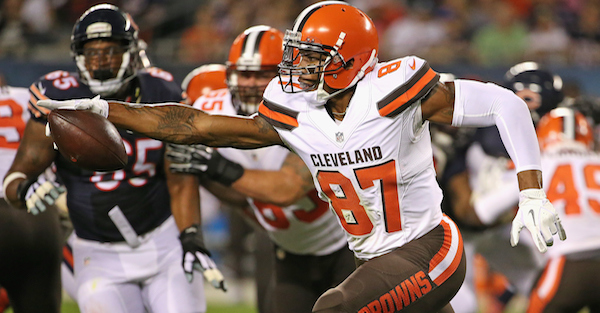 RELATED: This promo for 2016 Browns season tickets is the funniest thing you’ll see all week

Boone, who now plays with the Minnesota Vikings, played with the Pryor at Ohio State and during a radio interview was shocked that the Cleveland Browns receiver was still in the league.

“He’s still playing?” Boone asked during his interview with KFAN.

Boone was asked about the quarterbacks he had during his college playing career, which included former Heisman winner Troy Smith.

“Unfortunately I had Terrelle Pryor, too,” Boone said. “I could not stand any minute with him. The kid was so arrogant at the time. I hated everything about him.”

Pryor was one hell of a college quarterback, throwing for over 2,700 yards and 27 touchdowns in his junior season, along with 754 rushing yards and four touchdowns before NCAA violations forced him to enter the 2011 Supplemental Draft. Pryor was selected in the second round by the Oakland Raiders.

After 2013, where Pryor saw the most extensive playing time of his career (nine starts; 3-6 record), he signed with the Cleveland Browns and made his career position switch. He’s yet to catch a pass in game action, but the reviews from Browns camp have been mostly positive.