Paired with an elite offensive line, one team has “caught the attention” of Adrian Peterson 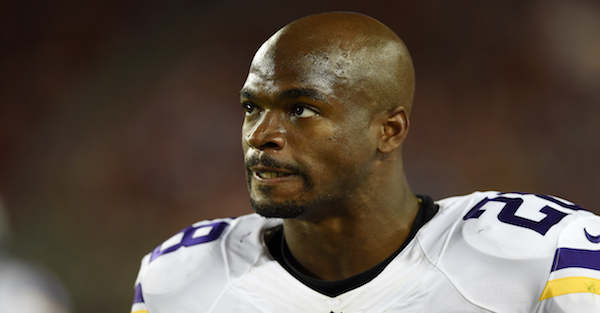 Adrian Peterson is set to become a free agent on March 9, and the Oakland Raiders are already on Peterson’s radar.

According to ESPN’s Josina Anderson, the Raiders’ elite offensive line caught the attention of the former MVP.

Another team catching the attn of Adrian Peterson, along w/ others, the #Raiders & their OLine. Carr lowest sack rate, RBs 6th YAC/r in '16. pic.twitter.com/MzhHvjh0VF

Latavius Murray is a free agent for the Raiders, and though Derek Carr wants him back, it’s unclear whether he will return. If Murray isn’t back with the Raiders, then they would be a logical destination for Peterson.

Carr had the lowest sack rate in the NFL last season, and the Raiders’ offensive line was considered among the best in the NFL.

Peterson tweeted a video of him lifting weights Wednesday morning.

Job 8:7 Your beginnings will seem humble, so prosperous will your future be. My mindset pic.twitter.com/YPJdRycu92

Peterson has also expressed interest in the New York Giants, Tampa Bay Buccaneers and Houston Texans, and the Minnesota Vikings are also open to bringing him back. The free agency period begins on March 9.