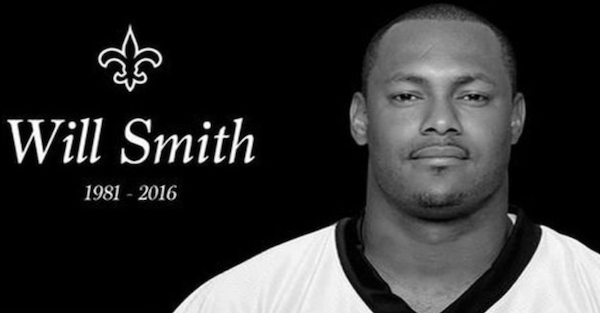 Tyrann Mathieu called out Will Smith’s alleged shooter, and the responses were shocking

After Saturday night’s road-rage tragedy in which former New Orleans Saints defensive tackle Will Smith was shot and killed, passengers from Will Smith’s vehicle and the alleged shooter, Cardell Hayes, have emerged with varying stories.

The attorney for Hayes’ passenger, Kevin O’Neal, released a statement as well, claiming the gunshot that killed Will Smith saved the driver and his passenger, via USA Today:

“My client believes that Cardell saved his life,” said Tanzanika Ruffin, the attorney for passenger Kevin O’Neal, in a statement to WDSU-TV. “Smith had a gun and was going to shoot it and Cardell may have saved both of their lives.”

According to O’Neal’s attorney, it was “justifiable homicide,” per the report.

“In my mind this is justifiable homicide,” Ruffin continued in the statement, “Was Will Smith acting like a Saint? This was a hit-and-run that ended up in a tragedy. You’ve got the aggression of two football players, facing off with each other as if they are on the field and you are going to get your point across by any means necessary.”

According to ESPN, Will Smith’s wife, Racquel Smith noted through her attorney that her husband was trying to protect her during the incident:

Attorney for Will Smith’s family begins with statement from wife Racquel Smith. She said that night, “as he always does, he was protecting her and trying to protect her as best he could.”

While executing a search warrant on Will Smith’s Mercedes and his alleged shooter, Cardell Hayes’ Hummer, police reportedly found a loaded gun in each vehicle, per NFL.com.

“…Detectives recovered a fully-loaded 9 millimeter handgun inside (Will Smith’s) vehicle. In addition, police also found a fully-loaded revolver in the vehicle belonging to shooting suspect Cardell Hayes, who has been charged with second-degree murder. Initial ballistic tests on the weapons, however, revealed neither gun had been fired, police said. A .45 caliber handgun recovered by detectives Saturday was used in the shooting, police stated.”

Will Smith’s wife, Racquel Smith, was shot in the leg and treated for her injuries, while Will Smith was shot in the back and side late Saturday night following a reported road-rage incident and died shortly thereafter, according to the USA Today.

Hayes could also be charged in the shooting of Racquel Smith in addition to the second-degree murder charge he faces against the alleged shooting of Will Smith, per Associated Press.

Detectives are reportedly in the process of reviewing surveillance video released by FOX 8 News in New Orleans on Monday evening, appearing to show former Pro Bowler Will Smith’s vehicle striking Hayes’ Hummer prior to the road-rage shooting that killed the former New Orleans Saints defender.

“Prior to the actions that led to Mr. Smith’s death, my client was involved in a hit-and-run. Someone hit him. The person failed to pull over,” Hayes’ attorney, John Fuller said, per CBS. “My client trailed behind this person in an effort to get their license plate number. My client also called 9-1-1.”

According to Hayes’ attorney, per USA Today, the case is much more complex than the police have made it out to be as he points to Hayes calling 911 after being hit and convincing a witness to stay and speak with police.