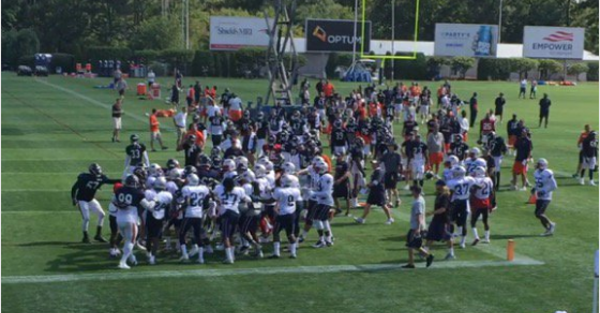 The Chicago Bears and New England Patriots are participating in joint practices this week. If day one is any indication, the NFL may need to provide MMA referees when the two teams face off Thursday for their preseason game.

RELATED: LA fans welcomed the Rams back with an insane brawl against Cowboy fans

According to CBS Sports, the two were in 11-on-11 drills when they went from grabbing each others face masks, to a shoving match. That led to teammates from both sides joining the fight.

A look at the fracas. Nearly became a full-on brawl. pic.twitter.com/G7IXbiVdM4

Butler was ultimately ejected by Bill Belichick for his role in the fight while Jeffery was sent to the sideline.

Butler and Jeffery’s fight wasn’t the only one to take place either, as newly-acquired tight end Martellus Bennett got into it with Chicago’s defensive lineman Lamar Houston.

From my vantage point, it appeared Lamarr Houston and Martellus Bennett were involved in the second flare up during that FG drill.

Someone should shout “Mortal Kombat” in the middle of practice one day, just to see what would happen.