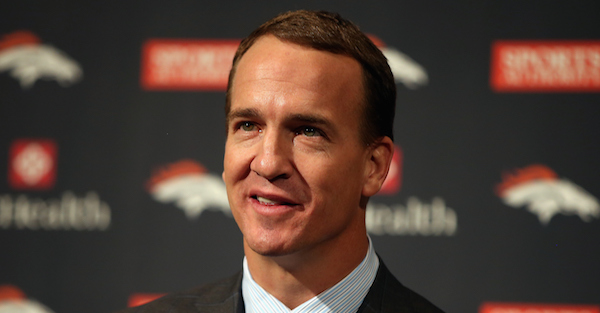 Doug Pensinger/Getty Images
ENGLEWOOD, CO - MARCH 07: Quarterback Peyton Manning addresses the media as he announces his retirement from the NFL at the UCHealth Training Center on March 7, 2016 in Englewood, Colorado. Manning, who played for both the Indianapolis Colts and Denver Broncos in a career which spanned 18 years, is the NFL's all-time leader in passing touchdowns (539), passing yards (71,940) and tied for regular season QB wins (186). Manning played his final game last month as the winning quarterback in Super Bowl 50 in which the Broncos defeated the Carolina Panthers, earning Manning his second Super Bowl title. (Photo by Doug Pensinger/Getty Images)

Peyton Manning’s playing days have been over since he won Super Bowl 50 with the Denver Broncos, and his latest actions have increased speculation about his second career.

Manning was spotted at the White House with President Donald Trump and Sen. Bob Corker (R-TN) after playing a round of golf at Trump’s golf course in Sterling, Virginia.

Related: Former SEC/NFL ref tells a story about Peyton Manning that shows even in frustration, he?s as classy as they come

Later that same day, Manning was recognized at the Ford’s Theatre Gala for his philanthropic work. Sen. Corker introduced Manning, and President Trump was in attendance.

It was an honor to present the Lincoln Award to my longtime friend Peyton Manning at last night's @fordstheatre gala. pic.twitter.com/I9yFgb8CbY

Manning has denied interest in politics in the past, but he is close with several politicians, including Sen. Corker. Manning has also donated to several Republican campaigns.

After President Trump’s inauguration, Manning addressed a group of Republican lawmakers with Trump and vice president Mike Pence in attendance.

If Manning did choose to run for office, he would likely be a very popular candidate in Tennessee given his background playing college football for the Volunteers.

If Manning didn’t want to run for office but still wanted to remain in the spotlight, he could also have a career in broadcasting. But the more time Manning spends with high-profile politicians, the more speculation there will be about his political career.