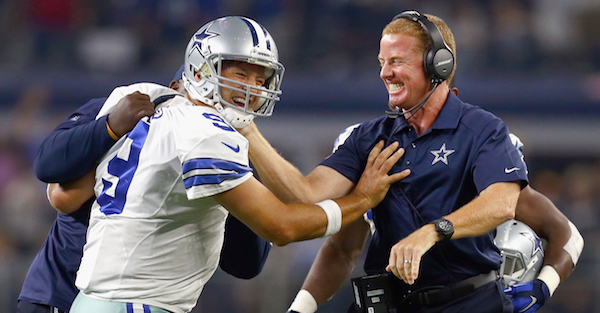 ARLINGTON, TX - SEPTEMBER 13: Tony Romo #9 of the Dallas Cowboys celebrates with head coach Jason Garrett of the Dallas Cowboys after scoring the game winning touchdown against the New York Giants at AT&T Stadium on September 13, 2015 in Arlington, Texas. (Photo by Tom Pennington/Getty Images)

While Dallas Cowboys tried to trade up for Paxton Lynch on Day 1 of the NFL Draft, plenty of other targets remains across the board.

It really breaks down into two categories for Dallas — high picks or value picks:

Connor Cook (second-round target)
A solid arm with athleticism, but doesn’t make the best decisions in the world. Sounds like someone the Cowboys already have?

Christian Hackenger (second- or third-round target)
He has all the tools to be the next franchise guy, but he’s definitely a work-in-progress. Is that worth a second or third-round pick?

Cardale Jones (third- or fourth-round pick)
Huge arm. Was a guaranteed top-five pick before he came back to school. Could be a steal in the fourth.

Dak Prescott (third-, fourth- or fifth-round pick)
Solid legs, decent arm, not great decisions. He was a Heisman trophy candidate for about four weeks and fell off. Could be an interesting project.

Vernon Adams (sixth- or seventh-round pick)
Could be the steal of the draft. Has all the tools to be the next Russell Wilson.