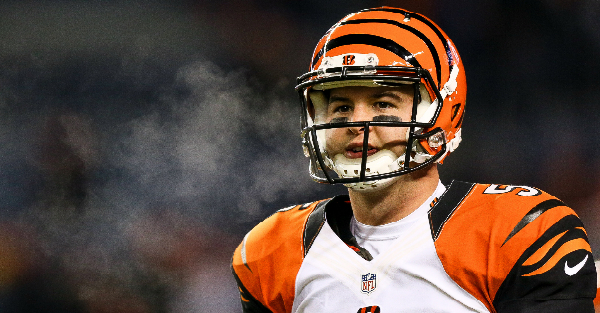 DENVER, CO - DECEMBER 28: Quarterback AJ McCarron #5 of the Cincinnati Bengals looks on during player warm ups before a game against the Denver Broncos at Sports Authority Field at Mile High on December 28, 2015 in Denver, Colorado. (Photo by Justin Edmonds/Getty Images)

According to Harbaugh, McCarron resembled New Orleans Saints quarterback Drew Brees during his pre-draft visit to the Ravens last year, via ESPN.

“He really has a quick release,” Harbaugh said. “His accuracy, his decision-making at Alabama, were really good, and you see that with the Bengals so far.”

After a shaky opener against the Pittsburgh Steelers where he threw two interceptions, McCarron has been relatively trouble-free in a win over the Cleveland Browns and a highly-competitive overtime contest against the Denver Broncos.

How much further he’ll need to lead the Bengals in unclear, as quarterback Andy Dalton continues to recover from his hand injury.