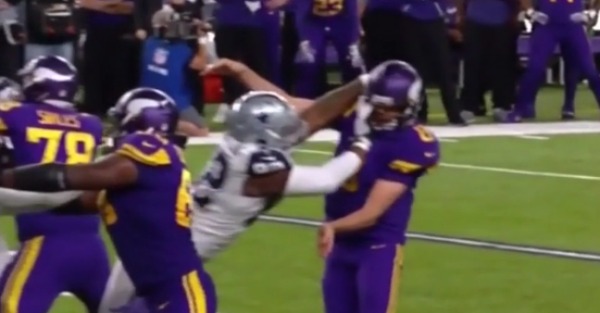 After Thursday night’s squeaker of a win over the Vikings, the Cowboys have proven to not only have some of the best young talent in the league on their side, they just might have the powers that be pulling for them as well.

Defensive tackle Cedric Thorton’s hit on Sam Bradford during a potential game-tying two-point conversion attempt in the game’s waning seconds was about as clear a hands to the face penalty as there’s ever been. And as often as quarterbacks generally get the baby treatment specifically for that call, the miss by officials was breathtaking.

What a drive, but:

But what would normally be dismissed as home cookin’ can’t be. The game was in Minnesota. So, let the conspiracy theories begin. If the penalty is called, as it obviously should have been, the Vikings get another shot at the conversion and if successful, would have had a good chance to hand Dallas its second loss, tipping the first domino in what could have a chain of postseason-altering events.

Minnesota moves to 7-5 with the win, inching to within a half game of the NFC North-leading Detroit Lions. And with three highly winnable games against Jacksonville, Indianapolis and Chicago out of the four left on the schedule, the Vikings essentially lockup a Wild Card berth, or even win the division with a stumble or two from the Lions.

And maybe, just maybe, a Cowboys loss puts the team in a tailspin and they end up losing three of their final four games of the season. With the Giants, Lions and Eagles making up three of those last four, it’s not so far-fetched. So for argument’s sake, 10-2 after the Vikings loss ends up being 10-6 and Dallas doesn’t even win the division, and also needs help to even get a Wild Card berth.

RELATED: Before Ezekiel Elliott was running over defenders, he was throwing down on the hardwood

Unfortunately, that’s a narrative that could never hold a candle to the one currently playing out in Dallas. The Cowboys now get to continue their magical run, zeroing in on home-field advantage through the playoffs  and, for all intents and purposes, a ticket to the NFC Championship game.

All that said, the bigger picture here as far as conspiracy theories are concerned is that the Cowboys keep pressing forward. Just like when the Notre Dames of the college football world are winning, it’s a juicier storyline and a much more lucrative proposition than the alternative.

Even if that alternative was probably the way things should have gone down.