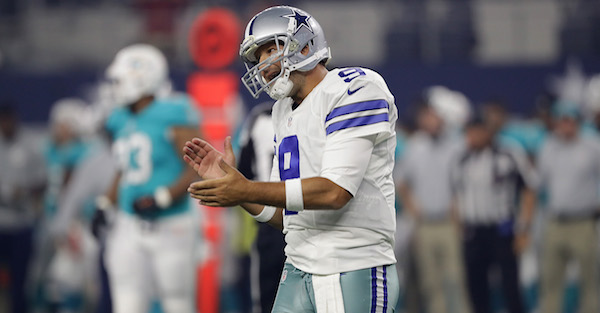 Tony Romo will return to the field for his first regular-season performance since Thanksgiving of 2015 on Sunday against the Philadelphia Eagles, per ESPN’s Adam Schefter.

Dak Prescott will get the start, but Romo and reserve quarterback Mark Sanchez are also reportedly expected to get snaps. This differs from original reports that only Sanchez would take snaps.

After two broken collarbone injuries in 2015 and a fracture in his back during the preseason, Romo has been forced into a reserve role behind Prescott.

According to the report, this move allows Romo the opportunity to play in the playoffs should something happen to Prescott.

It will also give potential Romo suitors a good look at what the former franchise quarterback can still offer.

“It’s never bad to get reps in games, but again, that question is for someone other than me,” offensive coordinator Scott Linehan said. “You could argue both reasons why you would or wouldn’t, but we’ve got to go play the game. If you spend a bunch of time concerned about things that could happen negatively, you get consumed by that, but I think we do a good job and Coach Garrett does a great job of just focusing on getting ready to play and focusing on the right things, and that’s what we’re doing.”

He’s certainly expected to be rusty, but it should offer a good look at what Romo can still offer.