Report: The Chargers’ owner is so mad it pretty much ensures the team is leaving San Diego 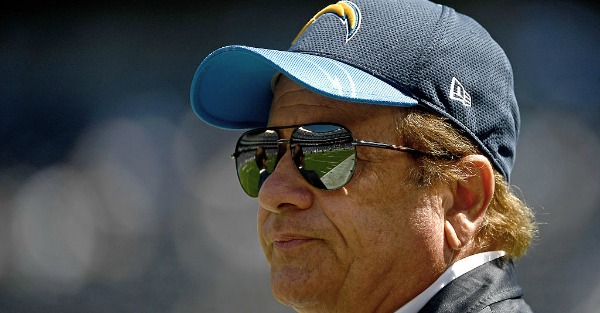 A proposal that San Diego Chargers owner Dean Spanos says on the surface might look like a last-ditch effort by local politicians to keep the team around has only infuriated him and all but guaranteed his plans to relocate.

According to Deadspin, Spanos was embarrassed after receiving a letter on Tuesday from four city council members offering a 99-year lease at an annual cost of $1 per year, while the Chargers and the NFL would be expected to foot the bill for the building and maintenance costs of a new stadium.

The letter, which was also sent to the NFL, read in part:

The current site is equivalent to over 60 downtown blocks that can be transformed from an empty parking lot to a state-of-the-art, one of a kind NFL experience. The development of the current site with a $1 per year 99-year lease would be a good starting point for a discussion.

An anonymous source close to the situation asserts that Spanos sees the offer as a way of diverting blame for the Chargers’ move, while also humiliating him and his family.

“If the goal was to infuriate the single remaining decision-maker in this process, mission accomplished,” the source said.

RELATED: Broncos defender gave his opponent the most unlikely threat and shut him up for good

At first glance, the proposal may appear to be a valid attempt at keeping the franchise in San Diego, but the costs associated with running and maintaining such a stadium make the idea seem as absurd as Spanos is suggesting.

The team currently pays around $15 million per year in operating costs, not to mention another $100 million in deferred maintenance projects sits on the table.