Report: Tony Romo would take a pay cut for at least one team 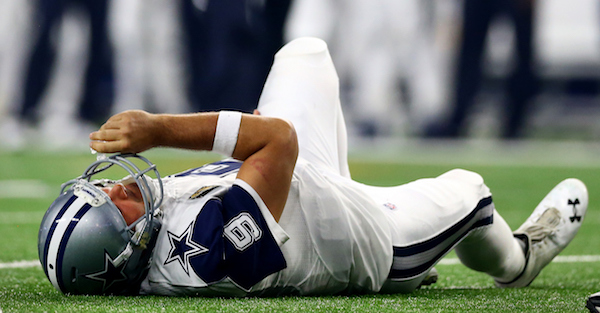 Despite reports of a potential blockbuster trade, Tony Romo is still expected to be released by the Cowboys, and it looks like he has one destination in mind that he would even take a pay cut for.

According to Denver reporter Benjamin Allbright, the Broncos would be looking to acquire Romo through free agency at about $10-12 million per year. Clarence Hill Jr., a reporter for the Dallas Star-Telegram, indicates that is a deal that Romo would gladly take.

As for Romo, the #Broncos won't trade for him. They'd be willing to acquire him as a FA in the $10-12 mil per year range (plus incentives).

romo would take that deal https://t.co/rKvIhFtazX

Those salary numbers are a big reason why Romo will likely be cut over traded. It is difficult to move him at that cap hit number, and the Cowboys would likely prefer to clear his contract off the books altogether.

Romo, 37, is still seen as a top quarterback when uninjured. Of course, injuries have derailed Romo’s past two seasons, and rookie Dak Prescott was able to usurp the starting quarterback position in 2016.