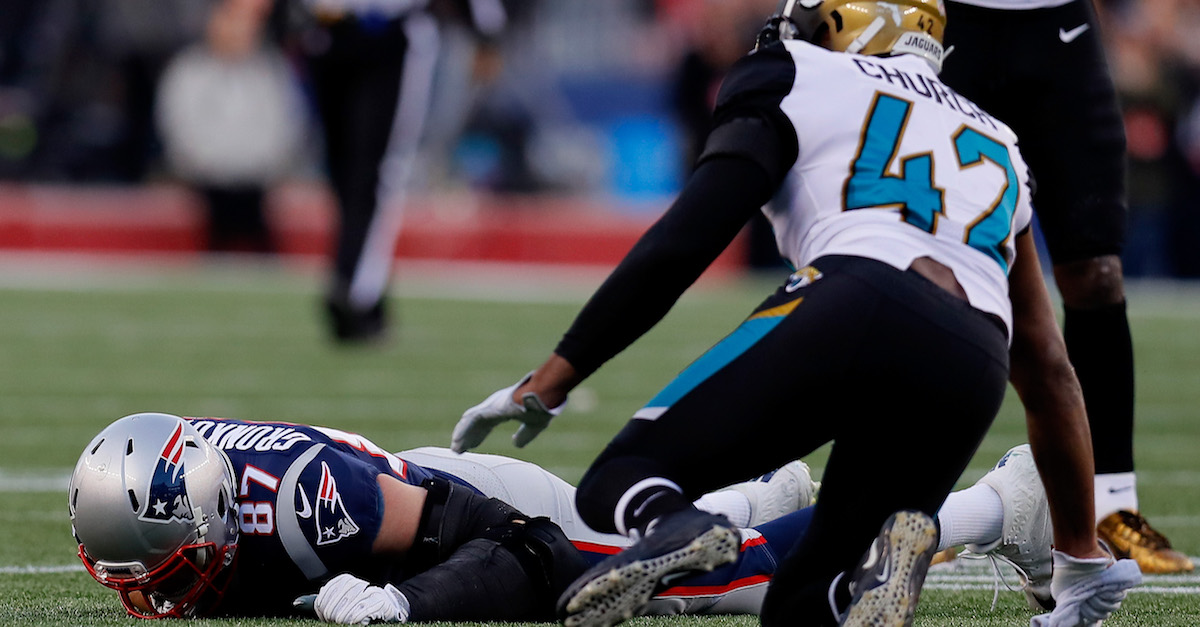 Kevin C. Cox/Getty Images
FOXBOROUGH, MA - JANUARY 21: Rob Gronkowski #87 of the New England Patriots reacts after an injury after being hit by Barry Church #42 of the Jacksonville Jaguars in the second quarter during the AFC Championship Game at Gillette Stadium on January 21, 2018 in Foxborough, Massachusetts. (Photo by Kevin C. Cox/Getty Images

Rob Gronkowski was knocked out of the AFC title game after a tough helmet-to-helmet hit by Barry Church of the Jacksonville Jaguars, but even that hit may not keep Gronk out of the Super Bowl.

This is according to Ian Rapoport of NFL.com, who is reporting that Gronkowski is potentially expected to make a comeback for the Patriots’ Super Bowl matchup with the Philadelphia Eagles:

#Patriots TE Rob Gronkowski is said to be in good spirits following his concussion and those involved are optimistic about his status. pic.twitter.com/IMWR5S5G9w

Taken at face value, this is not an extremely surprising report. Gronkowski is easily one of the toughest players in the NFL — he’s played through a handful of injuries at a high level — and it’s worth noting that he did walk off the field after the hit by Church in the AFC Championship game.

He’s a tough player, but concussions are no small deal, especially in today’s NFL.

The good news is Gronk has two weeks to recover instead of one, and that’s probably why the mood is optimistic surrounding his return.

Still, Rapoport did say that we’re still some time out from hearing anything official on Gronkowski, so stay tuned.