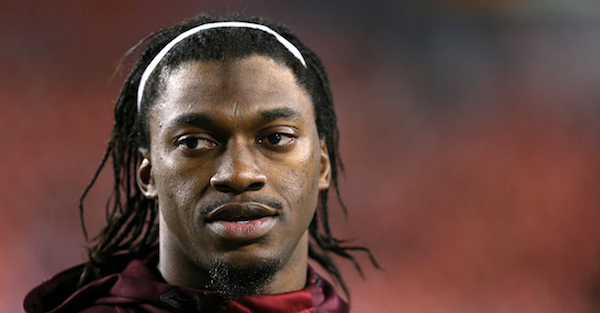 Yes, this is the timeline we’re in.

Here’s what Moss said, as transcribed by Scott Gleeson of USA Today Sports:

In an interview with Chad Dukes of 106.7 The Fan earlier this week, Moss said Shanahan was ?robbed of having more years? to coach in Washington and felt it was unfair that the franchise chose Griffin over Shanahan when the quarterback and coach “weren’t seeing eye-to-eye.” He said Shanahan’s 2013 firing, after the coach benched RG3 for the final three games of the season, was a message from Griffin to the rest of the locker room.

Moss said: ?I?m not sure if that was his whole plan, but when the whole thing went about, we hear that Mike Shanahan?s not coming back the next year, then we hear the quarterback like, ?Hey. Mm hmm.? Like, basically saying that you got me out of here not playing last year, the last few games, then that?s what happens. You get fired.

“You can?t do that. One thing I just shared with you, God don?t like ugly. The little credit that (Griffin) did take for saying, ?They didn?t like what I was doing? or ?They benched me and not allowing me to play,? that?s what happens.?

Moss was saying that RGIII was happy about the role he played in his head coach being fired, and that was something that the former Redskins’ quarterback did not take kindly to hearing about.

In fact, he came right out and called out his former teammate on Twitter:

No subtweeting needed
Santana Moss, I treat you like a brother & have always had your back. To openly lie about me is a betrayal…..

Been lied on a lot over the years

This is about as high profile as a beef as you’ll find between two former teammates, and it’s made more intriguing by the fact that they’re dragging the Redskins into it years later.

Strife between teammates isn’t extremely uncommon in NFL locker rooms. For it to explode out into the public years later, though…well, that’s something that’s going to get some attention.

Now, all we need is Shanahan weighing in on the topic, though the chances of the former head coach inserting himself into this drama seem pretty slim.