Per NFL Network insider Ian Rapoport's Twitter account, Chicago Bears linebacker Roquan Smith wants a trade. For Bears fans, this is a tough pill to swallow, as he's one of--if not--the best player on this Bears roster, and we aren't even out of training camp yet.

To make things even worse, Smith gave the news via the Notes app. Nothing is wrong with that, per se, but reading Roquan Smith pour his heart out via the Notes app makes it that much worse.

It's a bad situation to be in, but the Bears have been burned by paying a defensive player big money, and then the next season getting poor performance. And his name is Eddie Jackson.

The Bears are trying not to make that same mistake over again, but Roquan Smith is not Eddie Jackson.

Since joining the Chicago Bears as a first-round pick out of Georgia in 2018, Roquan Smith has started 59 games, and in those 59 starts, he's accumulated 524 tackles (348 solo, 176 assisted), 43 TFLs, 14 sacks, five interceptions, one forced fumble and one fumble recovery.

Given the fact that the Bears are in a weird situation with their roster, it's not an irresponsible thing to do to hold off on signing major contracts until both sides agree on a deal.

That said, Smith is a 25-year-old off-ball linebacker, so his value isn't necessarily sky-high even if his attachment to the Chicago Bears is. So, the trade packages offered for Smith won't likely be close to "fair" in the eyes of Chicago Bears fans nationwide.

The major aspect to remember in this is that Roquan Smith represents himself, so he doesn't have an agent in his ear about how to address this situation. So, while Bears fans have a right to be irrational at the moment, Smith's trade request could all be a ploy to get the contract extension he deserves from the new front office regime in Chicago.

And while he's never been voted into the Pro Bowl or earned Second-Team All-Pro honors, his play shows he's deserving of these recognitions. This isn't even the first time Roquan's held out due to contract negotiations.

So, How Can the Bears Make this Right? 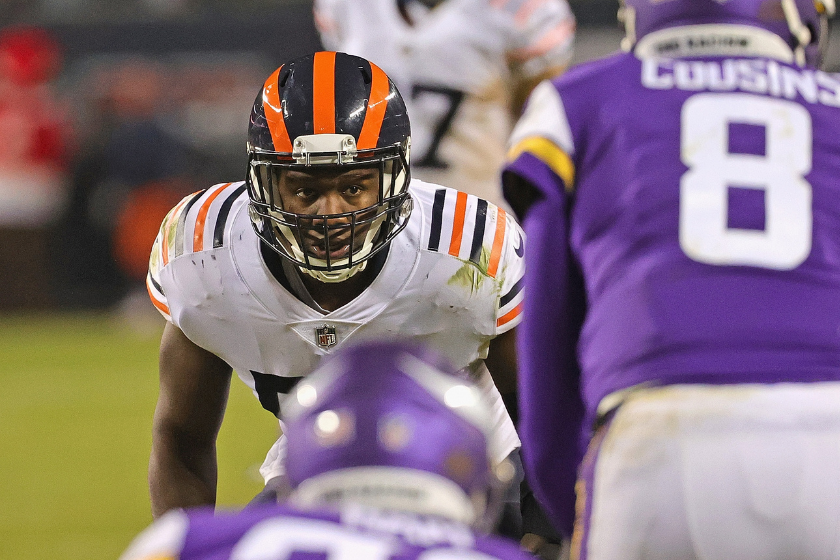 For starters, Roquan Smith made it clear that he loves the Bears and would be happy to finish his career in Chicago, but where things stand now, he doesn't see the new regime putting appropriate value on his name.

"They've refused to negotiate in good faith," Smith wrote via Notes app. "Every step of this journey has been 'take it or leave it.' The deal sent to me is one that would be bad for myself, and for the entire LB market if I signed [the contract]."

As mentioned previously, the alleged offer sent to Roquan was back-loaded and included de-evaluators. So, basically, the Bears wanted to have Roquan on a contract where most of the money came towards the end of his contract. That alone is a slimy contract to offer someone who's done as much for this team as Roquan Smith has.

Now, the de-evaluators aren't the worst thing I've ever seen. They're disrespectful to someone like Roquan, but as mentioned before, the Bears have seen it with their own eyes that players can become complacent when they receive their big payday.

Bears General Manager Ryan Poles is a rookie, and he wants to ensure he doesn't get bit where the sun doesn't shine. And signing a historically lower-value position to a major deal could be seen as one of those old takes exposed down the road. Thus far, Poles has presented himself as very calculated in what he does.

In a press conference on the day Smith's Notes app hit social media, Poles made it clear this wasn't how he wanted this situation to go with his All-Pro linebacker.

"I thought we would be in a better situation with Roquan," Poles said. "I'm a bit disappointed that we're in this spot."

Poles then added, "My intentions are to sign Roquan to this team."

Now, though Ryan Poles is the general manager, he isn't the only person making these tough decisions. The McCaskey family has and continues to be involved with these decisions.

Trading Roquan Smith away from Soldier Field would be disappointing for the Chicago Bears, as the return would likely be far less valuable than a star linebacker is to a team. That's the linebacker market, however, especially for an off-ball linebacker.

If the Chicago Bears want to keep building their team in the right direction, one that allows head coach Matt Eberflus and Co. to represent the NFC in the Super Bowl, signing Smith to a worthy deal should be a no-brainer.