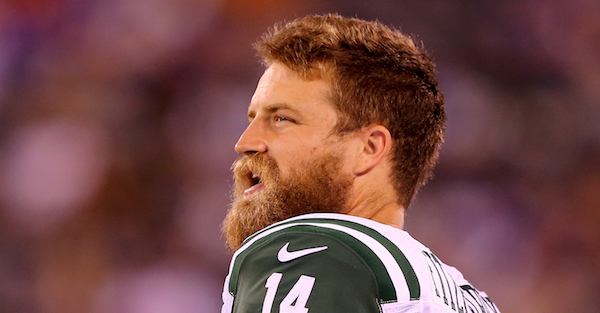 Elsa/Getty Images
EAST RUTHERFORD, NJ - AUGUST 29: Ryan Fitzpatrick #14 of the New York Jets looks on from the bench in the fourth quarter against the New York Giants during preseason action at MetLife Stadium on August 29, 2015 in East Rutherford, New Jersey. (Photo by Elsa/Getty Images)

Former Texas star and Rookie of the Year with the Tennessee Titans Vince Young Young opened up about his post-football career with Sports Illustrated Tuesday and he had some strong words in regards to Tampa Bay Buccaneer Ryan Fitzpatrick.

The subject of Fitzpatrick came up when SI’s Greg Bishop brought up the Arizona Cardinals’ backup quarterback Blaine Gabbert and how first-round busts like the former Missouri quarterback keep getting more opportunities.

?Exactly. I hate to name-drop, but [Ryan] Fitzpatrick is still playing!? He leads the league in interceptions, and he?s still f—— getting paid? I mean, what the f— is going on?? (Fitzpatrick was third in picks last year, but Young has a point.)

Young goes out of his way to destroy Fitzpatrick, specifically his production and the amount he’s still been getting paid by NFL teams.

The New York Jets, of course, signed Fitzpatrick to a big contract in 2016 after his breakout 2015 season, but he regressed back to his old self and imploded for the team in green and white last season. Now, Fitzpatrick is backing up Jameis Winston in Tampa Bay.

Still, it’s interesting to read what Young thinks about some of the quarterbacks in the NFL right now, and it’s certainly clear that he is no fan of Fitzpatrick or Gabbert.