Horrible video emerges on the play where the former No. 8 overall pick was injured 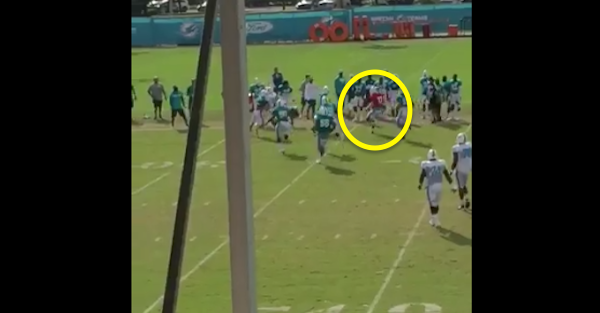 Former No. 8 overall pick and starting quarterback for the Miami Dolphins Ryan Tannehill was injured on a non-contact play Thursday morning, where his left foot planted, immediately hit the ground and had to be helped to the locker room by trainers.

If they do need another option, according to Dolphins beat reporter Omar Kelly, he’d imagine Jay Cutler would get the call over Colin Kaepernick.

And for the record, and I'm speculating, but I sense Adam Gase would give Jay Cutler a call before giving Colin Kaepernick a ring.

Here’s what Cutler told Schefter about possibly returning to the NFL after his retirement.

“To say ‘Hey, we’re going to sign you on Monday we need you to play on Sunday’ as a quarterback, that’s so challenging. I think Tony’s situation with possibly leaving the door open in Dallas if that’s what he’s doing is a little bit more realistic because he knows the system, he knows the guy, he knows expectations, he’s comfortable in the building. To go someplace completely foreign and try and learn a whole new system and develop timing with guys, especially on a team in a playoff race, that’s a tall order.”