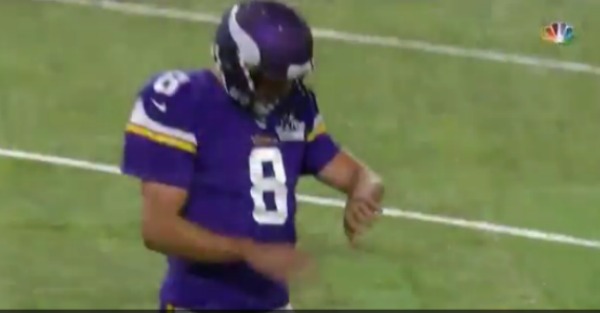 Sam Bradford suffered a bruised left hand early in Minnesota’s matchup with Green Bay Sunday night, but it did nothing to spoil his Vikings debut.

Bradford was hit hard on his non-throwing hand by Packers linebacker Clay Matthews in the game’s second quarter while following through on a pass. He was replaced briefly by Shaun Hill, but returned after getting his hand x-rayed to lead Minnesota to 17-14 victory and outdo Aaron Rodgers with 286 yards and two touchdowns on 22-of-31 passing.

Bradford had just 15 days to learn the offense and prepare for his new digs after Teddy Bridgewater went down just before the start of the season. And he hardly missed a beat. The six-year veteran did what Minnesota brought him in to do, he was steady and in complete command of the offense from the moment he stepped on the field.

“He can throw the ball,” Vikings coach Mike Zimmer said after the game. “He’s got some toughness about him, and this isn’t his first rodeo.”

Sam Bradford injures his hand on this hit. Looks like he's coming back in. pic.twitter.com/X2jH6kXen1