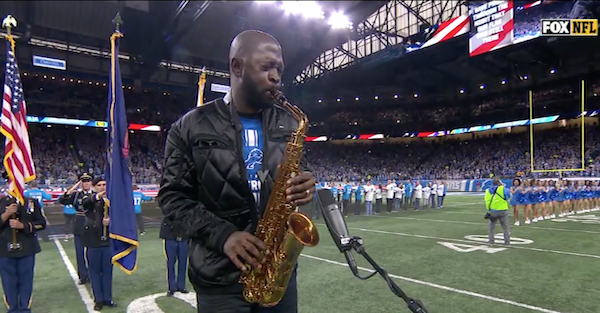 Thursday’s slate of NFL games started with easily one of the best national anthem routines this season, as a saxophonist Mike Phillips even had players impressed.

Twitter didn’t take long to respond either, as fans were amped up.

Submitted: The national anthem shall henceforth only be performed by a saxophonist.

The alto saxophone 🎷 National Anthem performance for #Lions #Vikings game was really impressive. And @AshBlaum had to point out that it doesn't sound like that when I play. Thanks babe. 😩

And that national anthem performance goes viral in 5, 4 … WOW! That was dope! #lionsvikings

Saxophone national anthem was more entertaining than 75% of the NFL games I've watched this season.

That was arguably the best national anthem I have ever seen. ABSOLUTELY INCREDIBLE. #mikephillips #MINvsDET

Let’s be honest, anything was better than last year’s Aretha Franklin debacle.