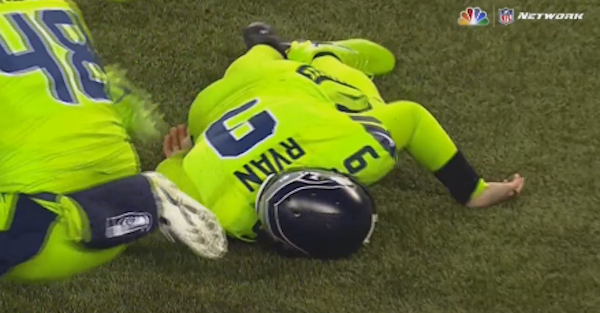 With the Seattle Seahawks up 21 in the fourth quarter, Pete Carroll decided that might be the best time to run a fake punt with athletic kicker Jon Ryan.

Ryan took the snap, blitzed through the middle, started to lose the ball and was crushed, getting knocked out cold before he was helped off the field.

Apparently it was bad enough that the punter had to be taken to the hospital and checked out.

Ryan’s wife later shared pictures from the hospital, and it appears (luckily) the visit was just to make sure everything was ok:

Thank you so much for all the well wishes. Jon is being checked out but in good spirits. You guys are so nice. ❤❤❤ pic.twitter.com/nJlsiXSnjd

❤😂☺ he wasn't leaving without his hat and tshirt. pic.twitter.com/utN8SH5aS0

Maybe next time Carroll won’t rub it in his opponent’s face?