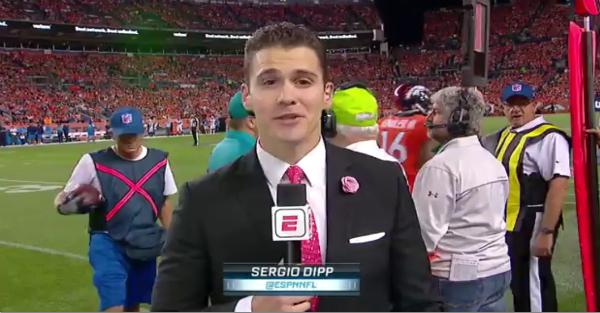 With the last game of the NFL’s Week 1 slate came one of the most awkward sideline spots in sports history.

That would be Sergio Dipp, who ESPN brought in to cover the sideline for Beth Mowins and Rex Ryan.

If ESPN doesn't use Sergio Dipp in the second half they're missing out on a huge opportunity. Everyone loves a good comeback story.

Please God. All I want to hear Beth Mowins say is "Let's go back down to Sergio Dipp on the sidelines." #MondayNightFootball #ESPN

If ESPN had a heart, they'd go back to Sergio Dipp so he could do a good report and get some confidence. But they haven't…