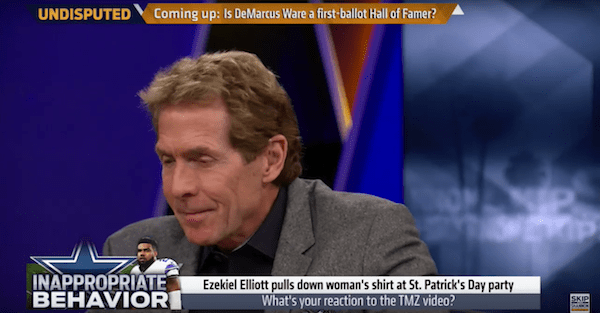 Dallas Cowboys running back Ezekiel Elliott has found himself in trouble again, and Fox Sports’ Skip Bayless thinks the star running back might be throwing his career away.

Ezekiel Elliott still doesn't get it. Sure hope he does before it's too late.

Related: Ezekiel Elliott may be in more trouble with the NFL after latest stunt

Elliott was caught pulling down a woman’s top at a St. Patrick’s Day party in Dallas, and while no charges were filed, Elliott could be suspended by the NFL.

?This was obviously just so, so bad and so, so wrong,” Bayless said, via a Fox Sports transcription. “And I was not surprised, because it?s always something with Ezekiel Elliott. He?s always on the edge of trouble, if not in trouble. You said ?trouble follows him,? no, he seeks it. Unwittingly, maybe, but he just seeks it, because he constantly puts himself in harm?s way. Wrong place, wrong time, wrong situation.

“Obviously he just doesn?t get it, and I?m not sure he will until it?s too late? I?m afraid it?s going to be too late that he learns his lesson because he gets so punished he has to learn his lesson. And it may cost him part or all of his career before this is over, because it has been one thing after another after another. To the point that I?m going to ask Jerry Jones publicly, maybe you should do what you did for Pacman Jones back in the day, or for Dez Bryant – and that?s to hire a babysitter. 24-hour security to hang with him.?

Elliott was involved in domestic violence accusations during last season, though he wasn’t suspended by the NFL. Bayless said he feels like Elliott is daring the league to suspend him.

“The behavior is inexcusable given what?s hanging over his head, ongoing. It comes across to me like he?s daring the NFL to suspend him,” he said. “It comes across like he?s continuing to dare the devil in every situation he throws himself into. It?s time and time again that I have to sit back and ask myself ?what were you thinking?? Well, he wasn?t.He just doesn?t think, and he?s not afraid yet to have to stop and think before he acts.?

Elliott might not be reprimanded for his latest actions, but his career off the field isn’t off to a great start despite his success on the field. If he doesn’t correct his behavior, his career could be in trouble.