Some Steelers fans were blaming a retired running back for the team’s loss Sunday, and here’s why 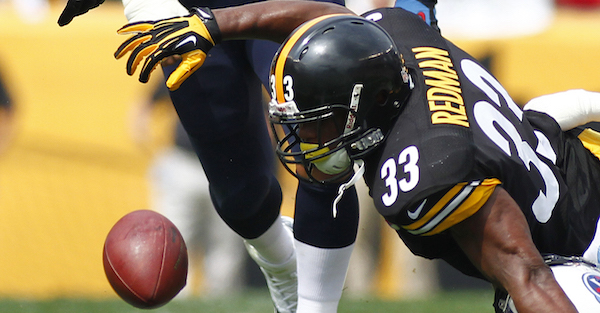 PITTSBURGH, PA - SEPTEMBER 08: Isaac Redman #33 of the Pittsburgh Steelers fumbles the ball in the first half against the Tennessee Titans during the game on September 8, 2013 at Heinz Field in Pittsburgh, Pennsylvania. (Photo by Justin K. Aller/Getty Images)

Fitzgerald Toussaint had a costly fumble late in the the Pittsburgh Steelers-Denver Broncos tilt Sunday afternoon.

It was a brutal moment for the undrafted free agent and the injury-ravaged Steelers, but some Pittsburgh fans took to Twitter to go after the other No. 33, Isaac Redman.

Redman retired in 2013 after a four-year stint with the Steelers and was quick to correct fans, per Big Lead.

Toussaint is likely still kicking himself for that one, but at least some didn’t know he turned the ball over late.