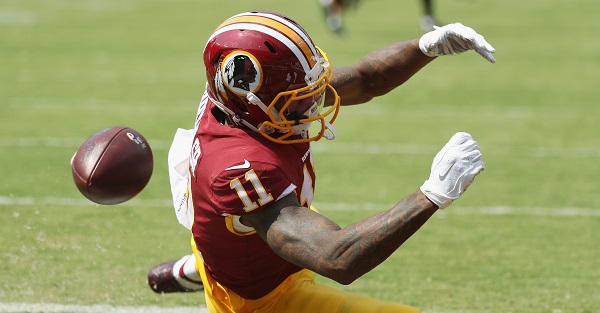 Washington suffered a close-fought 29-20 loss to Kansas City on Monday evening and that was only one part of a brutal night for wide receiver Terrelle Pryor. Following the game, TMZ Sports posted the following video of Pryor swearing at a fan/heckler that was clearly supporting the Chiefs.

Pryor’s actions were seen by many as unacceptable, but in the aftermath he posted this to Instagram explaining that the fan was using racial slurs against him “several times” over the course of the game.

You may have seen the video of Terrelle Pryor yelling with a fan. He posted this on Instagram as to why. (Language warning) pic.twitter.com/w16WdmGGe1

Obviously, there is absolutely no place for that kind of language in the direction of anyone and, on the heels of the incident, NFL spokesman Joe Lockhart spoke with ProFootballTalk on the next step for the abusive heckler.

“We are looking into all aspects of it and we will report back when we have concluded that review.

“We have no tolerance for racial comments directed to anyone. Those fans are not welcome to come back this week, next week, or any time.”

This is the appropriate response and the full report on the investigation will be interesting to sift through. Pryor (nor anyone else) should have to work under those conditions and even if his reaction was undesirable (and caught on camera), that certainly does not excuse the actions of any fan that allegedly uses this type of language.