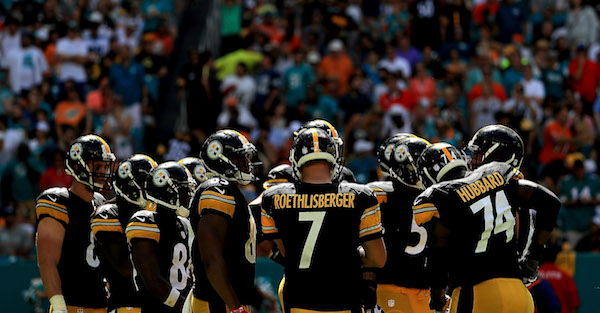 Quarterback Ben Roethlisberger left Sunday’s loss to the Miami Dolphins with a knee injury, and it was reported Sunday night that he will undergo surgery with a meniscus tear:

Steelers quarterback Ben Roethlisberger has a torn meniscus in left knee and will have surgery Monday morning. No timetable for his return.

Steelers' QB Ben Roethlisberger will undergo knee surgery Monday for torn meniscus, as @RonCookPG reported. Out next week vs Pats, at least.

Wide receiver Sammy Coates is dealing with a fractured finger and laceration on his hand as well on the offensive end.

Roethlisberger missed four games last season with an MCL sprain. He’s been banged up pretty much yearly, but has been able to play through a chunk of his injuries, including rib, shoulder, ankle and foot injuries.

It will be a serious hit to Pittsburgh’s potential for success without Roethlisberger, with just Landry Jones and Zach Mettenberger the only other quarterbacks left on the roster. We’ll see how Pittsburgh manages the time Roethlisberger misses.