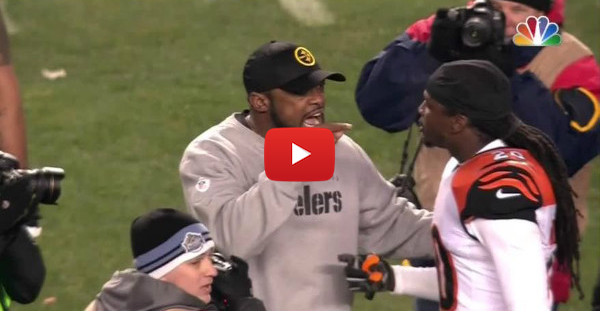 Le’Veon Bell exited Sunday night’s game against the Cincinnati Bengals with a hyperextended knee suffered from a low hit from Bengals safety Reggie Nelson. He didn’t return, and only finished with 20 yards on eight carries.

During his post-game press conference, Tomlin said the exchange wasn’t a result of Nelson’s hit but rather over a game of he said, she said.

Mike Tomlin says he has no issues with Reggie Nelson's hit on Le'Veon Bell, that it was legal

Tomlin is a pretty fiery guy and I could definitely see him throw hands if Lewis didn’t step in.

Earlier in the game, Tomlin graced us with this amazing chest-pounding GIF. I think what we learned here is don’t mess with Mike Tomlin.