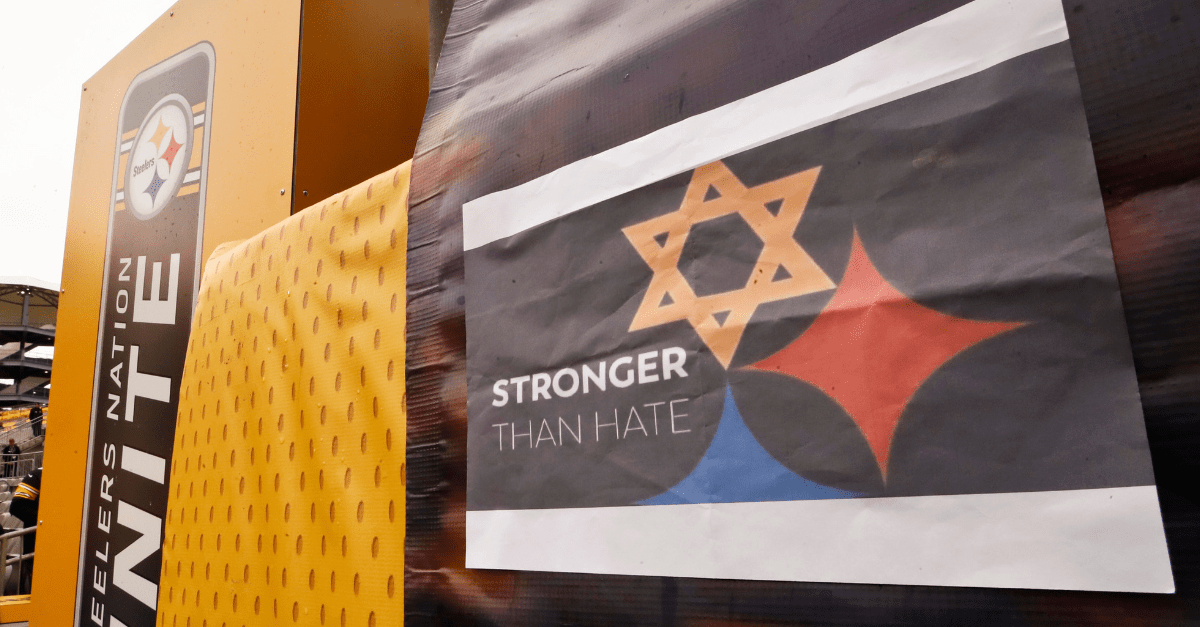 When tragedy hit Pittsburgh early Saturday morning, the community responded in a big-time way. It really took no time at all for the entire city to rally around each other and show genuine support.

A little more than a 24 hours after 11 people were shot and killed by a gunman inside the Tree of Life Synagogue in the Squirrel Hill neighborhood  ? what Mayor Bill Peduto called the ?darkest day of Pittsburgh?s history ?the Steelers honored the victims and their families prior to Sunday?s game at Heinz Field in Pennsylvania.

“Our hearts are heavy, but we must stand against anti-Semitism and hate crimes of any nature and come together to preserve our values and our community,? Steelers owner Art Rooney said.

The Star of David was inserted in the team?s logo and displayed at the stadium and the organization observed a moment of silence prior to the home game against the Cleveland Browns.

This was not the only observance, either. Far from it. The Vancouver Canucks held a moment of silence prior to Saturday night?s game against the Pittsburgh Penguins at Rogers Arena in Canada.

The Penguins, which also updated their logo, has canceled its annual Halloween-themed night on Tuesday and will hold a collection at the game to benefit the victim?s families at PPG Paints Arena.

The Vancouver Canucks just held a moment of silence before tonight’s matchup.

We may be in Vancouver, but our hearts are always in Pittsburgh. 💛

"This one is for Pittsburgh, boys." pic.twitter.com/UFy0q4Lb3q

“The Pittsburgh Penguins join the greater Pittsburgh community in standing up against this senseless violence and supporting the victims and families of the Tree of Life Synagogue,? Penguins president and CEO David Morehouse said. “Under these circumstances, we determined it was not appropriate to continue with our annual Halloween theme on Tuesday, so those activities have been cancelled. The entire city has a heavy heart.?

My prayers goes out to families of the victims, everyone in the city of Pittsburgh, and the Jewish-American community, I can’t believe the news. Stay strong 🙏🏾#PittsburghSynagogueShooting

Deeply saddened to hear the news of the shooting in Pittsburgh this morning. My thoughts and prayers are with all of those affected. Stay strong Pittsburgh.

Praying for the congregations, the Pittsburgh communities, the Squirrel Hill neighborhood, the first responders and our leadership, as they find a way to come together and hold each other up during the horrific event that took place at Tree of Life this morning.

Pittsburgh will not heal completely over the weekend. It will take weeks, months, years, and maybe even forever to recover from such a tragedy. However, it?s amazing to see the city?s biggest sports franchises are there to support everyone during such a difficult time.

READ MORE: What Happened at the Tree of Life Synagogue in Pittsburgh?