Sure, no one can stop DeSean Jackson. But you’ll never guess what can 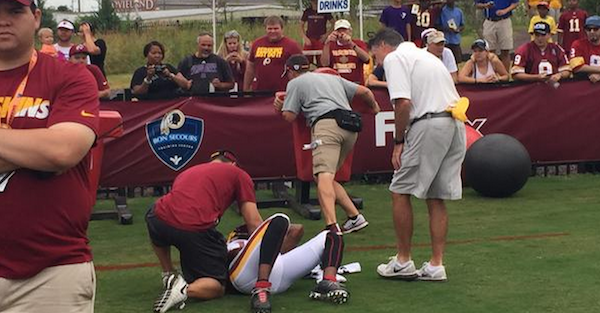 Washington Redskins wide receiver DeSean Jackson is one of the most electric pass-catchers in the NFL.

He said just as much earlier in the week, noting, “no one can guard” him, including elite defensive backs Darrelle Revis nor Richard Sherman.

When it comes to a blocking sled though, Jackson is no match:

DeSean Jackson hit a sled finishing a route earlier in camp… came out of tent in Tshirt with ice bag on shoulder. On sideline now

DeSean Jackson (shoulder) did not speak to reporters as he left field after practice. Team says there will be an update later.

Luckily for Jackson, there won’t be any blocking sleds when he takes the field as the regular season begins.