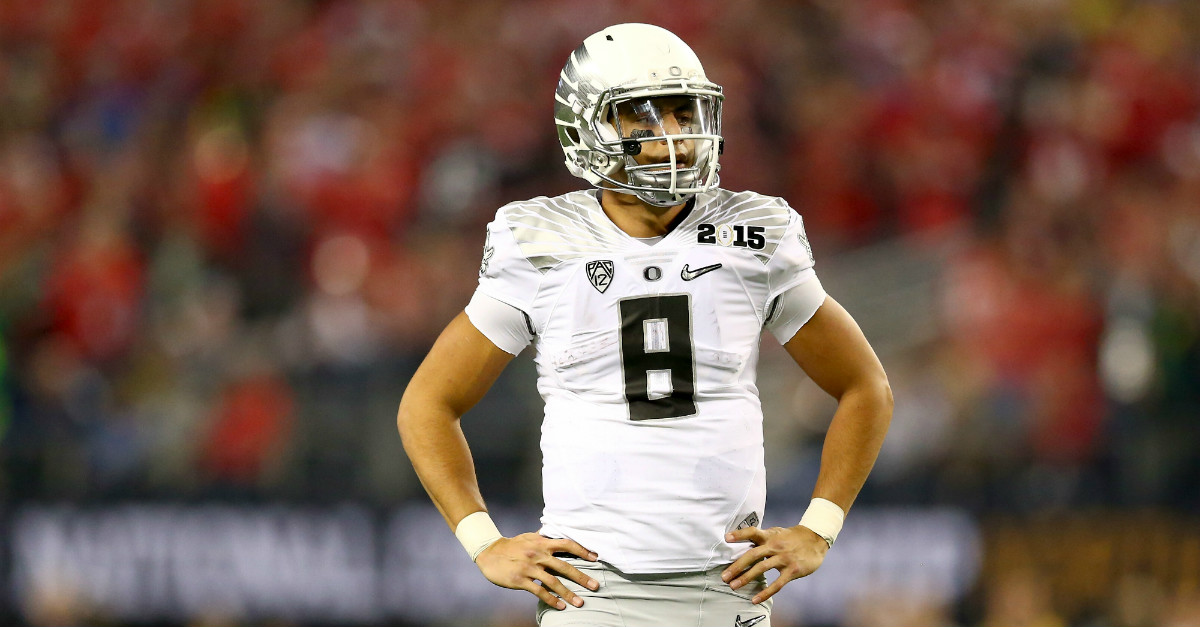 Personality-wise, Jameis Winston and Marcus Mariota could not be anymore different. Winston is a very outgoing, in-your-face kind of quarterback. He also enters the league with a lot of off-the-field baggage. Mariota is very laid back, introverted and quiet. He’s not the vocal leader some teams covet at the QB position.

His personality is a concern for the Tampa Bay Buccaneers, according to Roy Cummings of the Tampa Tribune.

?The other thing that [the Bucs] are not a big fan of, and you?re going to hear more about this, they are not big fans of his personality,? Cummings said. ?And you?ve got one very engaging guy with loads of charisma. He?s likeable when you get around him, in Jameis Winston. And then you?ve got another guy who?s very introverted, very quiet. He doesn?t really command your attention when you?re around him, a very quiet soft-spoken guy.”

It is a valid concern to have, especially for a quarterback. These are the guys that are supposed to fire everyone up in the huddle. Are veterans going to trust and listen to a quarterback that doesn’t talk and doesn’t seem fired up?

?The Bucs are looking at it and saying, you know, ?I got a guy here that kind of grabs you by the throat when he?s in the huddle and says, ?We?re going guys. We?ve got 82 yards to go. We?ve got a minute and 12 seconds to do it. We?re going to get there.? And then you?ve got another guy who, I don?t know what he says in the huddle, but it doesn?t come across that way, at least according to scouts it doesn?t.

?So I think the Bucs are in the camp that they?re a little bit concerned about that guy, not the face of the franchise, the leader of the football team,? Cummings said. ?I think they want the leader who has more natural leadership abilities.?

Last year, teams said the same thing about Minnesota Vikings quarterback Teddy Bridgewater. Bridgewater was taken with the last pick in the first round, in part because of his personality, but mainly because teams were concerned about his small hand size.

Bridgewater proved in his rookie season last year that “quiet” quarterbacks can succeed in the league. The rookie almost led the Vikings to a playoff berth. I don’t think the Bucs should be too concerned with Mariota’s quiet personality. If anything, they can be assured that he won’t be getting in trouble.