Terrelle Pryor thinks the Browns will win the rest of their games, and a division rival can’t stop laughing 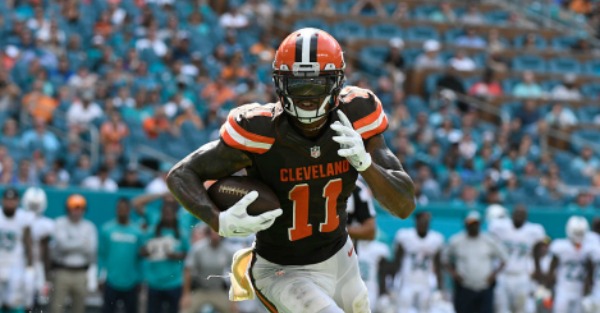 Terrelle Pryor’s being laughed at for saying that the 0-3 Browns could win the rest of the games on its schedule.

And with good reason. Even if Cleveland had Robert Griffin III or Josh McGown under center, and injured rookie wideout Corey Coleman back on the roster, winning 13 straight is, well, laughable.

RELATED: Despite being winless, this player thinks his teams is one of the NFL’s best

The idea unsurprisingly attracted a Twitter wise crack from Pittsburgh Steelers running back DeAngelo Williams, who suggested that Pryor must have meant Ohio State winning out.

Maybe he was talking about Ohio State! 🤔😂 pic.twitter.com/5eF09RoJms

Running the table would certainly be more plausible were Pryor still in Columbus. The undefeated Buckeyes still have some Big Ten heavyweights on the slate in Wisconsin, Michigan and Michigan State, but that’s not nearly as tall an order as the upcoming games the Browns have with the Patriots, Giants and Cowboys. Not to mention two a piece against the Steelers and Bengals.